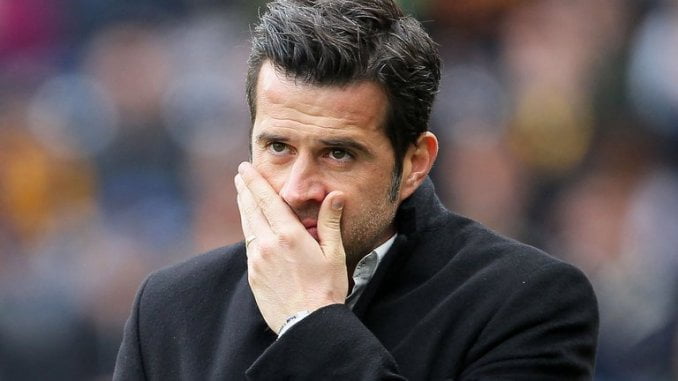 Everton Football Club’s failure to bolster their defence in the close season is “not the best scenario”, manager Marco Silva said on Friday.
Silva’s worry must be a concern as there are only three senior centre-backs available for selection ahead of the new English Premier League season.
After Kurt Zouma’s return to Chelsea following a season-long loan deal, Everton have only Yerry Mina, Michael Keane and Mason Holgate as their main centre-back options.
British media reported the Merseyside club were unsuccessful in their bid to sign Manchester United’s Chris Smalling earlier in the transfer window.
They also failed to lure his team mate, Marcos Rojo, before the deadline on Thursday.
“We had our targets and for many reasons we didn’t achieve some of them,” Silva told a news conference ahead of their league opener at Crystal Palace on Saturday.
He added: “That’s football. It’s not the best scenario to start with just three defenders, but we have to manage the situation in the best way.”
Silva said his squad was stronger with the signing of Alex Iwobi from Arsenal and Moise Kean from Juventus among others.
But he highlighted the holes in central defence following the release of Phil Jagielka and Ashley Williams.
“Our squad is deeper, but you have to look for the general picture. We lost two important players. It’s not easy to look to the Premier League and see two important players lost,” the Portuguese coach said.
He added: “If you ask me if I prefer more competition in that position… but I’m here to manage the players we have… 18 left this summer and we signed seven.
“Let’s see what will happen until the end of August with other players.”
Midfielder Fabian Delph is out of Everton’s opener with injury while left back Leighton Baines is a doubt.