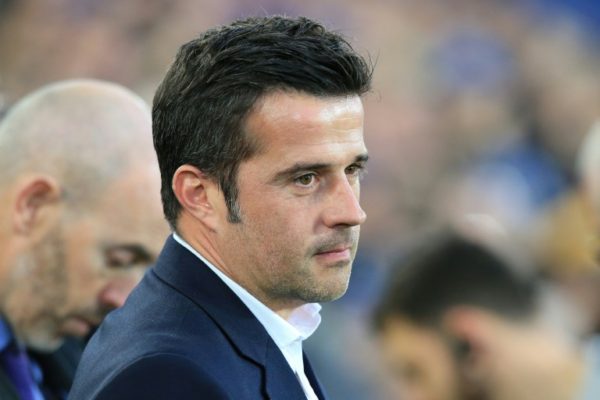 Marco Silva has challenged Alex Iwobi to continue providing “high-quality, creativity and goals” as the deadline-day signing aims to build on an impressive start to his Everton career.
The 23-year-old forward had scored in each of his first two starts for the Blues, finding the back of the net with accomplished headers in Everton’s 4-2 Carabao Cup victory at Lincoln City and 3-2 Premier League success against Wolverhampton Wanderers.
Iwobi’s speed, penetration and intelligent use of the ball had seen him seamlessly slot into manager Silva’s progressive Everton team.
And having already showcased his goal-scoring instinct, Silva had backed Iwobi to continue providing decisive contributions in the final third of the pitch.
“It is something I will demand from him more and more,” the manager told evertontv.
“With the quality he has – I am 100 per cent sure he will give important things for us.
“He will give high quality in our attack. He can provide creativity, playing from the left or behind the striker as an offensive midfielder.
“And if he can – and I am sure he can – score more goals, it will help the team.
“The first time I met with him, it was something I put in his mind [his ability to score goals].
“If you look at our wingers and the players in forward positions, it is something I demand from them.
“Richarlison scored many, many goals last season, Theo scored some.
“I want more from the other two [Iwobi and Bernard].
“Bernard started the season with a goal in the second game, which was important for him. Alex has done the same thing now.”
Iwobi had been in international action for Nigeria this week, starting as his country battled out a 2-2 draw in a friendly match against Ukraine in Dnipro on Tuesday.
His attention will now turn to sustaining his fine Everton form, when the Toffees take on Bournemouth at the Vitality Stadium on Sunday (2pm).
Everton had scored a total of seven goals in Iwobi’s two starting appearances, and Silva believed the forward’s blend of attributes had added a fresh dimension to the Toffees’ attack.
“He has quality in that final decision,” Silva explained. “In our attack, he is a really important player.
“He can see the space, he can see the solutions, he can see his teammates in the best position to score.
“In those moments he will help us, because in our last decision he will raise the level of our squad.”