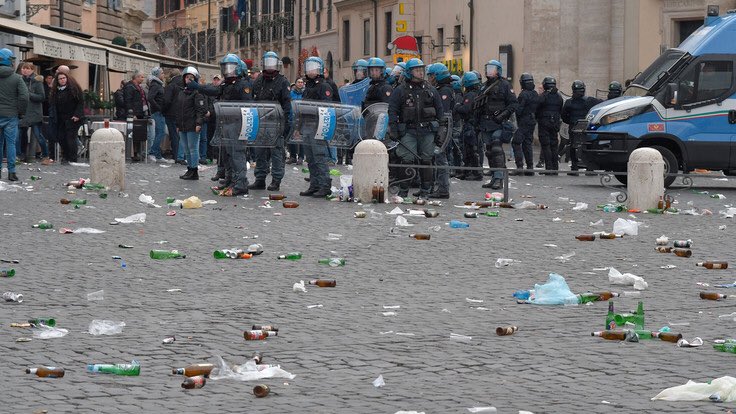 On a night the curtains were drawn on the group matches in Europa League, with Milan and Steven Gerrard’s Rangers crashing out, fans of the Bundesliga side, Eintracht Frankfurt, wrote another script of trouble, rioting in Rome.
The riot marred Eintracht Frankfurt’s win against Lazio.
Five Eintracht Frankfurt fans were arrested in clashes with police in Rome ahead of their dead-rubber Group H match against Lazio as over 9,000 Germans swamped the Stadio Olimpico.
Eintracht had already comfortably taken top spot in the group, thanks to winning all five of their previous games, while Lazio were also in the last 32 regardless of the result of the match.
Eintracht won 2-1 as they came back from a goal down thanks to second-half strikes from Mijat Gacinovic and Sebastien Haller.
However, German fans charged the pitch after Joaquin Correa’s 56th-minute opener for Lazio, and subsequently threw smoke bombs and flares at both Lazio fans and the police.
Elsewhere in the night, Rangers crashed out of the Europa League after falling 1-0 at Rapid Vienna.
Steven Gerrard’s Rangers, who had to win in Vienna in their final group game in order to qualify for the last 32, finish third in Group G, two points behind Rapid, thanks to Dejan Ljubicic’s 84th-minute winner, which sees the Austrians through to the knockout stages, level on 10 points with group winners Villarreal.
The Spaniards ensured top spot by beating bottom club Spartak Moscow 2-0, thanks to goals from Samuel Chukwueze and Karl Toko Ekambi.
Rangers came close to breaking the deadlock in the 21st minute of a match with few shots and little incident when Connor Goldson thudded a header against the bar, but Ljubicic rolled home the winner late on to seal Rangers’ fate.
Last year’s runners-up Marseille finished bottom of that group after losing 3-1 at home to Apollon Limassol and ending the group stage with just a single point.
Chelsea, who had already won Group L, looked to be on their way to a perfect sixth win from six when Willian crashed home a free-kick on the half-hour mark at Vidi, but Ethan Ampadu’s own goal just two minutes later gifted the hosts an equaliser.
Vidi then took the lead in the 56th minute after a blistering break, Georgi Milanov charging down the left and picking out Loic Nego, who brilliantly volleyed in the second.
However, substitute Olivier Giroud snatched a point for the Blues with another free-kick, which the Frenchman curled off the underside of the bar to maintain his side’s unbeaten group record.
BATE Borisov qualified alongside Chelsea after winning 3-1 at rock-bottom PAOK.
Malmo are in the knockout stages after snatching a 1-0 win at Besiktas that saw the Swedes leapfrog their Turkish hosts in the extremely tight Group I.
All four teams in the group were in contention for qualification on Thursday, but Genk managed to hold on to first place after hammering Sarpsborg 4-0.
Sevilla took top spot in Group J from Krasnodar thanks to a 3-0 win, while Rennes pipped Astana to the knockout rounds with a 2-0 win.