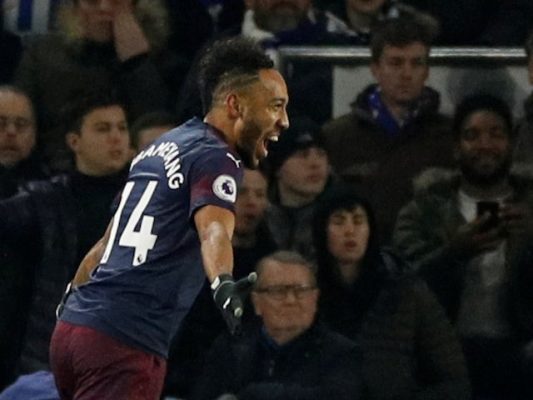 Share
Facebook Twitter LinkedIn Pinterest Email
Pierre-Emerick Aubameyang scored twice and set up another to earn Arsenal a 3-0 second-leg win over Rennes on Thursday evening, seeing them through to the quarter-finals 4-3 on aggregate.
Heading into the game trailing 3-1 from last week’s reverse fixture in France, the Gunners were soon back on level terms, thanks to two goals in the opening 15 minutes at the Emirates Stadium.
Aubameyang opened and closed the scoring for the hosts, either side of setting up Ainsley Maitland-Niles for his side’s second goal, which should not have stood due to an offside infringement.
Unai Emery’s men join fellow Premier League side Chelsea in the draw for the last eight, which takes place on Friday.
Aiming to become just the second team in Europa League history to overturn a 3-1 first-leg deficit, after Fulham against Juventus in 2010, Arsenal took no time at all to level up the tie on aggregate.
Aubameyang opened the scoring five minutes in when poking home an Aaron Ramsey cross, coming after some good link-up play between the Welshman and Maitland-Niles down the right.
Maitland-Niles was being given plenty of room down the right-hand side and he made the most of that 10 minutes later when heading Aubameyang’s cross past Tomas Koubek.
Aubameyang kept Ramsey’s pass in play, but the Gabonese striker looked to be stood in an offside position before picking out Maitland-Niles at the back post.
A weak Ramsey attempt aside, which was aimed right at Koubek with the midfielder slightly off balance, Arsenal struggled to create any further clear-cut openings in a stop-start first half that contained a number of careless challenges.
For their part, Rennes grew into the match a little more following a sluggish start and tested Petr Cech before half time through a long-range strike from Hatem Ben Arfa.
Rennes gave Arsenal a real scare shortly after the half-time restart as Ismaila Sarr picked out the post with his shot, which took a touch on its way through, after Shkodran Mustafi was caught on the ball.
The ill-tempered feel to the match continued throughout a nervy second half as a number of strong challenges went unpunished.
Sead Kolasinac produced a fine block in front of goal to keep out Sarr’s shot and Ramy Bensebaini gave Arsenal a further scare when volleying the ball against the opposite post to the one Sarr hit, though the offside flag would have denied him anyway.
A double change from Emery 20 minutes from time made a big difference for Arsenal, however, as moments after Alex Iwobi scuffed a shot wide from a good position, fellow sub Henrikh Mkhitaryan played a huge part in his side’s killer third goal.
Mkhitaryan slotted the ball down the left to Kolasinac, who in turn set up Aubameyang in front of goal for another simple finish.
Aubameyang missed two big chances inside a minute to complete his first hat-trick in Arsenal colours, poking wide of the post with just Koubek to beat and then skewing wide of the same post once teed up by Ramsey in front of goal.
It did not matter in the end, though, as Rennes failed to find a way through at the other end.
Arsenal Europa League gunners Pierre Emerick Aubameyang Rennes
Share. Facebook Twitter Pinterest LinkedIn Tumblr Telegram Email