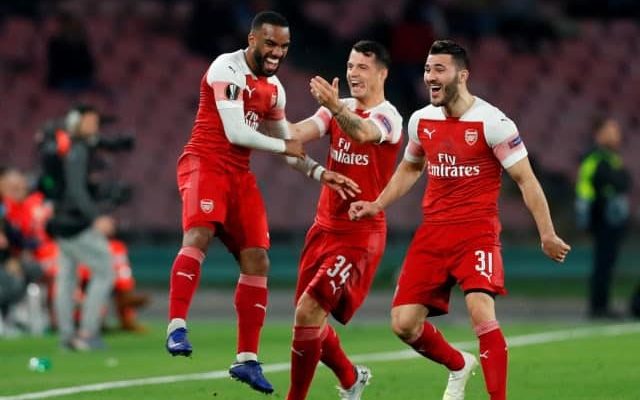 Arsenal have booked a place in the semifinals of the Europa League for the second season running thanks to a 3-0 aggregate win over Napoli, sealing the job with a 1-0 victory in Thursday’s second leg at the Stadio San Paolo.
Alexandre Lacazette scored the only goal of the night in Naples with a 25-yard free kick past Alex Meret, leaving Serie A’s second-placed side – already trailing 2-0 from last week’s first leg – with too much to do.
Unai Emery’s side saw out the match to make it six clean sheets in seven matches, comfortably setting up a final-four showdown with Valencia in the process.
Having seen his side lose the away legs in the two previous knockout rounds, Unai Emery took a positive approach by naming Alexandre Lacazette and Pierre-Emerick Aubameyang in attack, but there was no place for the benched Mesut Ozil.
Despite playing in front of a packed and vociferous home crowd, Arsenal started the quicker of the two sides, getting in behind a few times but having nothing to show for it.
The Gunners’ early dominance was almost undone as Napoli countered from a successfully defended corner and should have scored through Jose Callejon, who was denied by Petr Cech down low once played in by Kalidou Koulibaly.
Napoli grew into the match and had another decent opportunity when Arkadiusz Milik was picked out unmarked in the box, only to guide his header wide of the target.
Arsenal, dealt an injury blow half an hour in when Aaron Ramsey hobbled off after tweaking his hamstring, extended their aggregate lead before the break as Lacazette brushed himself down after being fouled by Nikola Maksimovic and sent a free kick past a wrong-footed Alex Meret.
The Napoli keeper shifted all his weight on to his right foot and could not get to Lacazette’s shot, leaving the Italians requiring four goals.
Jose Callejon volleyed wide, Milik glance an effort off target and Piotr Zielinski’s attempt from range was blocked in front of goal as the Serie A side closed in on a goal that would give them a glimmer of hope.
Aubameyang missed a glorious chance early in the second half as he failed to convert Henrikh Mkhitaryan’s cross from close range, meeting his match in Meret.
Knowing that the tie was out of their reach, the home players’ frustrations continued as Lorenzo Insigne’s attempted lob was easily dealt with by Cech.
Carlo Ancelotti’s decision to replace Insigne with an hour played did not go down well, with the forward kicking a bottle and sitting away from his teammates when eventually making it to the bench.
Milik was the next Napoli player to fluff his lines when missing the target from pretty much under the crossbar, and Hector Monreal avoided an embarrassing moment when turning the ball on his own goal to force Cech into a save, but Arsenal kept their clean sheet intact.