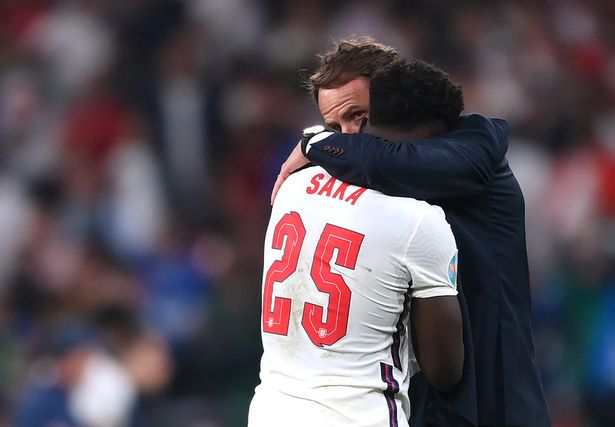 Bukayo Saka has instantly been subjected to sickening racist abuse after he missed a penalty in England’s heartbreaking Euro 2020 final defeat to Italy.

Saka, 19, came off the bench in the second-half of play with the scores locked at 1-1.

The Three Lions got off to the perfect start through Luke Shaw, only to be pegged back by Leonardo Bonnuci after the break.

He struggled to make an impact on the game both in the remaining 20 minutes of normal time and the 30 additional minutes in extra time.

After the game ended 1-1 after extra time, England earned the first advantage in the shootout when Jordan Pickford saved from Andrea Belotti.

But Marcus Rashford missed with the scores at 2-2, before Jadon Sancho did the same at 3-2.

Pickford prolonged England’s hopes with a sensational save from Jorginho, only for Saka to see Donnarumma save his penalty after bravely stepping up to take one.

The Arsenal star was visibly distraught on the Wembley turf following his miss, with his teammates dragging him back from the penalty spot to console him.

Southgate took full responsibility for the penalty defeat and told Saka he would not be left to suffer alone.

“It’s down to me, I decided on the penalty takers based on what we did in training,” he told BBC shortly after the Italians had lifted the trophy. “Nobody is on their own, we’ve won together as a team.

“In terms of the penalties, that’s my call and it rests on me.”

Sadly however, Saka has suffered horrific racist abuse on social media with several posting disgusting messages on his Instagram account.

Roy Keane also went out of his way to issue support to the three players that missed penalties, telling ITV Sport: “It’s an amazing night, a brilliant night of football. I said to Gary when it went to penalties that I didn’t think any team deserved to lose it.

“Somebody has to miss a penalty, but it’s not a night to be critical of any of the players, Gareth and his staff.

“I think they’ve been magnificent. Instead of criticising players who miss, I admire players who step up.”

Arsenal legend Ian Wright was also full of praise for Saka, adding: “He’s more than capable of taking that penalty, I don’t think age plays a part in that.

“He’s brave enough to want to take it. You say should he be? Of course he should, he’s in the England team because he’s good enough to be here.

“I’m devastated for everyone, not just Bukayo. I’m delighted that he’s brave enough to go up and take one.”