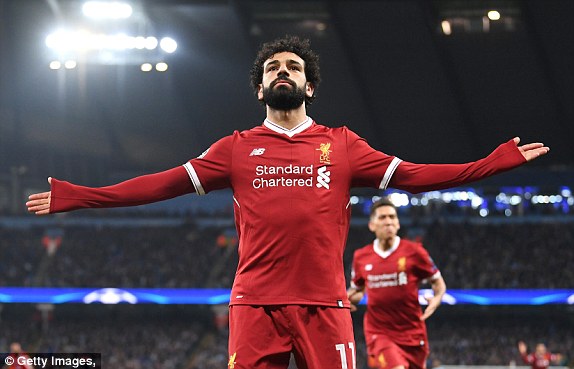 Liverpool have extended their unbeaten Premier League start to 13 matches courtesy of a 3-0 win over Watford at Vicarage Road on Saturday.
It took the Reds until the 67th minute to find the breakthrough, with Mohamed Salah opening the scoring against what had been an obdurate Watford defence.
Trent Alexander-Arnold doubled the lead with a fine free kick less than 10 minutes later, but Watford were offered a glimmer of hope when returning Liverpool captain Jordan Henderson was sent off eight minutes from time.
However, it was the visitors who added to the scoring despite their numerical disadvantage, with Roberto Firmino getting in on the act at the end of a quick counter-attack to wrap up a victory which sees Liverpool remain two points off Premier League leaders Manchester City, who were also big away winners with a 4-0 triumph over West Ham United.
Watford thought that they had taken the lead inside two minutes when Troy Deeney’s clever flick released Gerard Deulofeu through on goal, but the former Everton attacker’s convincing finish was ruled out by the offside flag.
Such an early chance did not prove to be a sign of things to come, though, as Liverpool began to dominate possession without being able to break through the disciplined shape of Watford’s midfield and defence.
The best moments of an uneventful opening half an hour fell the way of the hosts, and they should have done better nine minutes in when Alisson Becker’s risky pass out from defence saw them win the ball back in a dangerous position, only to squander a promising attacking platform.
The only hint of a Liverpool chance during that time saw Georginio Wijnaldum fail to get on the end of Xherdan Shaqiri’s clipped free kick into the box, and it was not until the 39th minute that either side had a legal shot of any description.
The final six minutes of the half was completely at odds with what had preceded it, though, as chances suddenly began to arrive at both ends – sparked by Roberto Firmino’s low snapshot which drew the first save from Ben Foster.
Watford responded immediately and should have taken the lead just seconds later when Deulofeu found Roberto Pereyra, whose powerful half-volley from inside the area was brilliantly saved by Alisson.
Liverpool failed to make the most of a lightning counter-attack shortly afterwards when Sadio Mane was crowded out, but the winger did have a shooting opportunity moments later when his acrobatic effort drew another save from Foster.
The resulting corner found an unmarked Mohamed Salah, who scored four goals the last time the two sides met, but his downward header was kept out by a scrambling Foster on the line as Watford held out until half time.
The second half quickly fell into a familiar rhythm as Liverpool enjoyed the lion’s share of possession, but their struggles to find a breakthrough were accentuated by the ease with which title rivals Manchester City were beating West Ham United.
Jurgen Klopp’s side did finally open the scoring with just under 25 minutes remaining, though, as Firmino and Mane combined to find Salah, who managed to squeeze his first-time finish past Foster from inside the area.
If the Watford keeper felt he should have done better with that one, there was nothing he could do to keep out Alexander-Arnold’s second as the youngster left Foster rooted to the spot with a stunning 25-yard free kick.
The goal appeared to have taken the game beyond Watford, but the Hornets were handed a potential route back into the match six minutes later when Henderson – already treading a disciplinary tightrope having been booked and then given a final warning by Jonathan Moss – received his marching orders for a cynical bodycheck on Etienne Capoue.
Watford subsequently ramped up their pressure in search of a goal back, with Isaac Success seeing one shot blocked before it could test Alisson, but that left them more exposed in defence and Liverpool exploited that with their third goal one minute from time.
Andrew Robertson led the quick counter-attack before pulling the ball back to Mane, whose powerful strike was brilliantly saved by Foster.
However, the ball looped up to Firmino, who bundled his headed finish past the keeper to end his own personal goal drought.
There was a late chance for Watford to grab a consolation when Craig Cathcart rose unchallenged to head a corner over the crossbar, but Liverpool held out for another clean sheet to extend their best-ever start to a Premier League season.