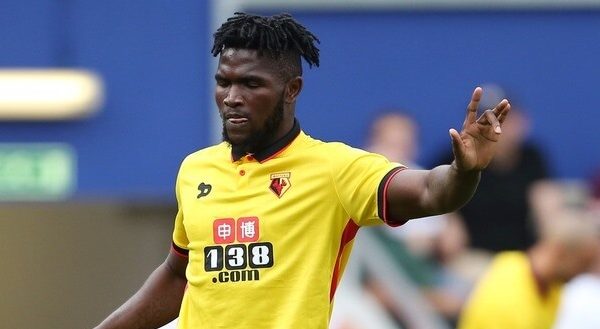 Share
Facebook Twitter LinkedIn Pinterest Email
Venue: King Power Stadium
Kick off: 4PM
Leicester City’s duo of Wilfried Ndidi and Kelechi Iheanacho will this afternoon battle their compatriot, Isaac Success, in a Premier League clash at the King Power Stadium.
Success will hope to continue the form when as they look to bounce back to winning ways after a three-game winless run.
On Thursday, the Vicarage Road outfit announced that the Nigeria international has been rewarded for his recent form with a new deal.
“This is a just reward for Isaac’s continued hard work and application this season,” Chairman and CEO Scott Duxbury told club website.
“We look forward to seeing him develop further over the coming years.”
The 22-year-old attacker joined the Hornets in August 2016 from Spanish La Liga side Granada in a record deal of around £12.5 million.
Watford and Leicester City are neck to neck with two points separating them on the log.
Leicester have won once in the Premier League since the death of club owner Vichai Srivaddhanaprabha and four others in a helicopter crash last month.
Watford have taken one point from their last three matches, but manager Javi Gracia should be in a positive mood after signing a new four-and-a-half-year contract this week.
He said: “With the players we have in this moment, I think we can improve our best position in the league and we will try to do it. Day by day, with that mentality I think we will be closer to achieving something good for the club.”
Leicester possible XI: Schmeichel, Pereira, Morgan, Evans, Chilwell, Iborra, Ndidi, Albrighton, Maddison, Iheanacho, Vardy.
Watford possible XI: Foster, Femenia, Mariappa, Cathcart, Masina, Hughes, Doucoure, Capoue, Peyreyra, Success, Deeney.
Isaac Success Javi Gracia Kelechi Iheanacho Leicester City Scott Duxbury Vichai Srivaddhanaprabha Wilfried Ndidi
Share. Facebook Twitter Pinterest LinkedIn Tumblr Telegram Email