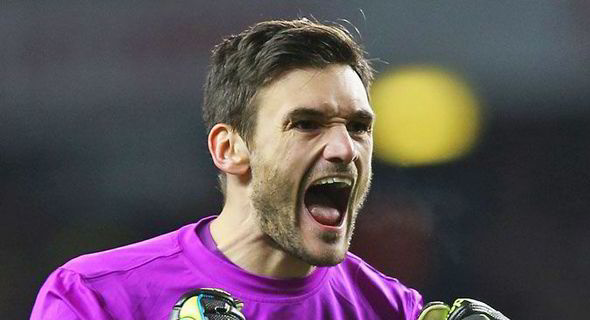 Share
Facebook Twitter LinkedIn Pinterest Email
Tottenham Hotspur made it four Premier League wins in a row as they edged past West Ham United 1-0 in a well-contested derby at the London Stadium on Saturday.
A fifth goal in seven games from the in-form Erik Lamela separated the sides, although Hugo Lloris was equally Tottenham’s match-winner, saving crucially from Marko Arnautovic in stoppage time as the hosts applied late pressure.
This fixture had yielded 28 goals in its last eight Premier League installments and there looked to be goals in the game from the off. Both teams had an early sighter as Lamela shot into the side-netting, and Arnautovic worked Lloris from 20 yards out after spinning away from Davinson Sanchez.
Despite Christian Eriksen’s return to fitness, Moussa Sissoko kept his place in a more compact Tottenham midfield, and the Frenchman, whose last goal was against the Hammers nearly a year ago, came close to opening the scoring when his side-footed shot was deflected narrowly over Lukasz Fabianski’s crossbar.
Toby Alderweireld threatened the Hammers goal again on 26 minutes when he met Kieran Trippier’s corner with a near-post header that he could not keep down. The Belgian was always needed to make a couple of crucial defensive interventions in a first half in which the hosts gave almost as good as they got.
A double blow in the minutes prior to the break gave Spurs the momentum, with the Hammers seeing big-money signing Andriy Yarmolenko stretchered off with an ankle injury moments before conceding the only goal of the game.
Sissoko’s run down the right was tracked by Felipe Anderson, but a clever dummy fooled the West Ham winger and the subsequent left-footed delivery was glanced past Fabianski by the head of Lamela for his fifth goal in seven matches.
West Ham came out fighting and Spurs needed Lloris to make a couple of crucial saves in the opening stages of the second period to retain their advantage.
The World Cup winner clawed Arnautovic’s header away from underneath his own crossbar, and foiled the Austrian again by turning his left-footed drive around the post after Harry Winks’s poor clearing header had fallen invitingly to him 20 yards from goal.
Only Lloris’s resistance and a lack of cutting edge from Spurs on the counter-attack prevented the type of high-scoring affair that the early stages promised, with young defender Issa Diop impressing once again for the Hammers in his duel with Harry Kane.
West Ham’s other centre-back, Fabian Balbuena, would have give Lloris little chance had directed his header on target from point-blank range on 61 minutes.
The Tottenham skipper was to be called into action again before the end though, when Arnautovic and Hernandez worked the ball though the visiting defence only to be thwarted by a brave block from the goalkeeper, rushing off his line.
A seventh win from nine league matches this season lifted Spurs into third before Liverpool and Arsenal kicked a ball this weekend. West Ham remain 15th in the table but should not be discouraged by another strong home performance against top-six opposition.
Erik Lamela Hugo Lloris Marko Arnautovic Premier League Tottenham Hotspur West Ham United
Share. Facebook Twitter Pinterest LinkedIn Tumblr Telegram Email