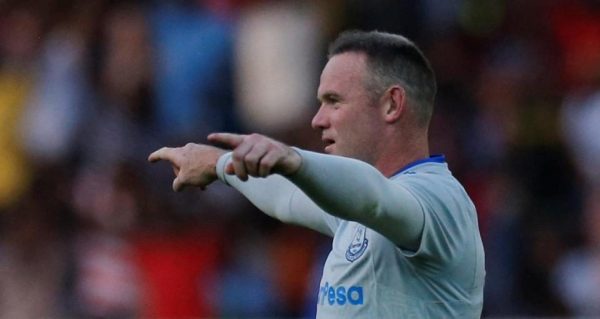 Everton has bounced back from two heavy defeats in a row with a 4-0 victory over West Ham United in Wednesday night’s Premier League encounter at Goodison Park.
Former Toffees boss David Moyes was humbled on his return to Merseyside as a Wayne Rooney hat-trick and a late Ashley Williams header saw Everton get back to winning ways in style.
The hosts were given the chance to open the scoring in the 17th minute when Joe Hart sent Calvert-Lewin flying in the box, prompting referee Michael Oliver to award a penalty.
A visibly disgruntled Hart kept out Rooney’s spot kick but the ball looped in the air nicely for the Everton captain to head into the open goal and give David Unsworth’s side the lead.
Rooney then slotted home his second of the evening just before the half-hour mark, capitalising on some poor defending to latch on to Tom Davies’s cutback to drill home from inside the box.
West Ham improved after the break and were given the opportunity to halve the deficit when Oliver awarded the visitors a penalty after Williams hacked down Diafra Sakho in the area.
Manuel Lanzini was tasked with the responsibility from 12 yards and fired low to Jordan Pickford’s right but the goalkeeper dived down to push the ball clear and preserve his side’s two-goal lead.
Rooney then sealed his hat-trick in style after Hart ran out of the box to clear a loose ball away from Dominic Calvert-Lewin, only for the former Manchester United man to fire the ball first-time into the empty net from his own half.
There was still time for another goal, Williams atoning for his earlier error by heading a corner past Hart in the 78th minute to seal a fine outing for the Toffees and a crucial three points which edge the club up to 13th in the table.
West Ham, meanwhile, remain in the bottom three, sitting 18th in the standings.