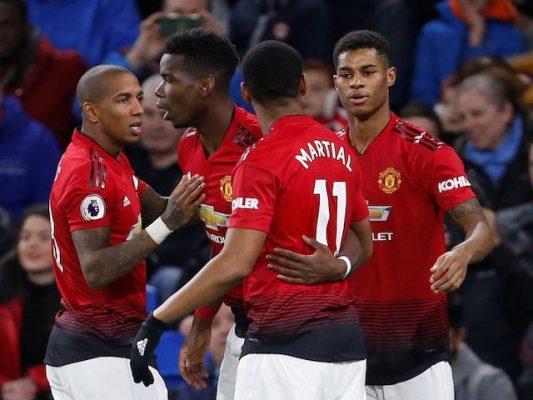 Man U vs. Liverpool
Venue: Old Trafford
Kick off: 4:30PM

History beckons for Liverpool at the home of their greatest rivals this afternoon when they face Manchester United at Old Trafford looking for a record-equalling 18th consecutive top-flight win.
A whopping 15 points already separate the sides after just eight games of the season, with Liverpool having won all eight so far this term compared to only two league victories for United.
Next month will mark 33 years since Manchester United appointed Sir Alex Ferguson, who almost immediately declared his intention to knock Liverpool off their perch and then went on to fulfil his bold claim over the next 26 years.
United’s decline since Ferguson’s departure has been dramatic, with a succession of managers, including David Moyes, Louis van Gaal, Jose Mourinho, and now Ole Gunnar Solskjaer, failing to restore the club to anything near their former glories – a six-year devolution made all the more difficult to stomach by the rise of Manchester City and Liverpool in that time.
City undoubtedly remain the lesser of those two evils from a United perspective, but so far this term it is Liverpool who have established themselves as the dominant force in English football, to the extent that chief executive Peter Moore last month claimed that the Merseysiders are now “back on their perch”.
While such a statement may have been a little premature, the signs certainly point to this being Liverpool’s best chance to end a 30-year wait to be crowned champions of England for a 19th time – something which would leave them one behind United in that particular list.
Eight wins from eight this season have seen Liverpool open up an five-point lead over champions Manchester City, a sizeable deficit to make up even considering how early it still is in the campaign.
In truth, Jurgen Klopp’s side have not always been as convincing as that perfect record suggests; they could have easily failed to win matches against Southampton, Chelsea and Sheffield United had their opponents showcased better finishing or not made crucial mistakes, while they needed a 95th-minute penalty to keep their 100% start alive against Leicester City before the international break.
The opportunity to equal Man City’s all-time mark of 18 at Old Trafford is one this Liverpool team will relish and, while it is a stadium which does not hold many fond memories from recent years, the gulf in class between the two sides is arguably more in Liverpool’s favour now than it has been at any stage since Ferguson took charge in 1986.
References to that season 33 years ago are particularly pertinent considering United are facing their worst start to a campaign since then should they fail to win on Sunday, and it took them only a few extra weeks to sack Ron Atkinson on that occasion.
Atkinson had actually led United to 10 successive wins at the start of the previous league season – one of only four teams to have reached the nine out of nine mark Liverpool are attempting to reach on Sunday, and the only one to have failed to win the title from that position.
Only Chelsea in 2005-06 have won the opening nine games in a Premier League season, and should they go on to break that record then it would be another serious reminder of their title credentials with United, Tottenham Hotspur and Man City in three of their next four league games.
Meanwhile, it was a defeat to Liverpool last season which eventually cost Mourinho his job at Old Trafford, although recent comments from Ed Woodward suggest that the under-fire Solskjaer is still some way away from having the final nail hammered into his coffin.
Nonetheless, an improvement is undoubtedly needed, having won just four of their last 23 matches across all competitions inside 90 minutes, while their only triumph of any kind in their five games before the international break was a penalty-shootout win at home to League One Rochdale.
The dire nature of those results have only been matched by the level of performance; the Red Devils could have no complaints at slumping to a 1-0 defeat at the hands of Newcastle United in their last outing, while that came off the back of a goalless draw against AZ Alkmaar during which they failed to register a single shot on target.
Goalscoring has been one of the biggest issues since the false dawn of a 4-0 triumph over Chelsea in their opening game of the season, failing to hit the back of the net more than once in any of their subsequent 10 league and cup games – their worst run since 2007.
It is a record which does not bode well coming up against the league’s stingiest defence, although there may be some truth in Solskjaer’s claim that facing Liverpool is actually the “perfect” game for his side rather than the worst possible one.
Without doubt they will need the ‘derby effect’ of the form book going out of the window, with United having won just two of their last 13 Premier League matches, picking up only 11 points from a possible 39 in that time.
Indeed, since Solskjaer was appointed on a permanent basis the Red Devils have earned only 17 points from 16 top-flight matches – a tally which averaged over a 38-game season would see them just scrape past the 40-point mark generally needed for Premier League survival.
The hope for United could lie in the fact that this match comes at Old Trafford; both of their league wins this season have come at home – and both have been impressive ones too – whereas Liverpool have only won two of their last 13 league games away to other teams in the ‘big six’, although one of those did come at Chelsea already this term.
Should the result go as expected then Liverpool would end the weekend 18 points clear of United after nine games but, as painful as that statistic might be for the 20-time champions, the more immediate concern could be the possibility of falling eight points adrift of the top four already.