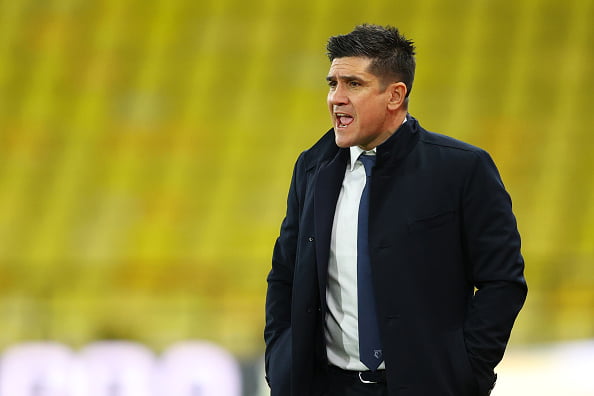 WATFORD, ENGLAND - JANUARY 16: Watford Head Coach Xisco Munoz looks on during the Sky Bet Championship match between Watford and Huddersfield Town at Vicarage Road on January 16, 2021 in Watford, England. Sporting stadiums around the UK remain under strict restrictions due to the Coronavirus Pandemic as Government social distancing laws prohibit fans inside venues resulting in games being played behind closed doors. (Photo by Richard Heathcote/Getty Images)
Share
Facebook Twitter LinkedIn Pinterest Email
Norwich City vs. Watford
Venue: Carrow Road
Kick off: 3PM
Two newly-promoted sides enduring difficult starts to life back in the big time prepare to renew hostilities today, as Norwich City welcome Watford to Carrow Road in gameweek five of the 2021-22 Premier League season.
The Canaries went down 1-0 to Arsenal last weekend, whereas Xisco Munoz’s side fell to a 2-0 loss against Wolverhampton Wanderers.
A significant summer outlay may have led to some initial optimism within the ranks at Carrow Road, with the arrivals of Josh Sargent, Milot Rashica, Billy Gilmour and Pierre Lees Melou representing impressive coups for Daniel Farke’s side following their promotion.
However, Norwich are re-learning the unforgiving nature of the Premier League the hard way and suffered their fourth defeat on the bounce last weekend, as Arsenal skipper Pierre-Emerick Aubameyang netted the only goal of the game at the Emirates.
Having conceded 30 shots to the Gunners – 17 of which were on target – Norwich could and probably should have lost by more on the day, but Arsenal’s lack of ruthlessness saw them keep the scoreline respectable as they remain bottom of the pile.
The Canaries are now the only team in the division yet to register a point this season, while Newcastle United are the only team to ship more goals than Norwich so far, and Teemu Pukki’s penalty against Leicester City represents their only strike at the correct end of the pitch.
The schedule does not get any kinder for Norwich before the end of the month, as Farke’s side must face Liverpool in the EFL Cup before taking on high-flying Everton in the league next weekend, and they welcome Watford to Carrow Road aiming to avoid a 15th successive defeat in the Premier League.
Watford have failed to keep the momentum going from their thrilling opening-day victory over Aston Villa, with Xisco witnessing his side suffer three defeats in succession to Brighton & Hove Albion, Tottenham Hotspur and Wolves without scoring a single goal.
Last time out against the Molineux outfit, Francisco Sierralta’s own goal broke Watford’s resilience after 74 minutes before Hwang Hee-chan came off the bench to double Wolves’ lead in the dying embers, as the Hornets’ 11-game winning run at home in all competitions came to a bitter end.
Watford had previously only suffered one defeat at Vicarage Road in 2021 before the Hornets’ sting lost its potency against Wolves, and one win from their opening four games sees them occupy 15th spot in the table – above Arsenal for the time being.
Munoz’s side can also look ahead to fixtures with Newcastle United and Leeds United in the next couple of weeks – two sides currently without a win in the Premier League season – but they travel to Carrow Road having won just one of their last six away from home.
However, that win did come against Norwich in April’s Championship clash – with Dan Gosling scoring the only goal of the game in that one – and the Canaries have suffered four consecutive defeats in league action against Watford.
Norwich City possible XI: Krul, Aarons, Hanley, Omobamidele, Williams, Gilmour, Lees Melou, McLean, Rashica, Pukki, Cantwell
Watford possible XI: Bachmann, Cathcart, Troost-Ekong, Sierralta, Rose, Louza, Etebo, Sissoko, Sarr, Hernandez, Dennis.
Carrow Road Norwich City Watford Xisco Munoz
Share. Facebook Twitter Pinterest LinkedIn Tumblr Email