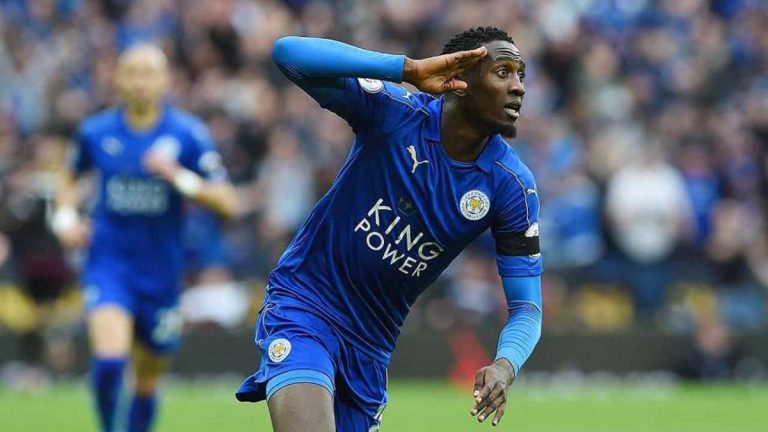 Frank Lampard was denied a winning return to Stamford Bridge after Chelsea were held to a 1-1 draw by Leicester City.
Mason Mount scored his first Chelsea goal inside the first seven minutes on his first appearance at Stamford Bridge.
But Wilfried Ndidi’s bullet header midway through the second half rescued a deserved point for Brendan Rodgers’ side.
On his Stamford Bridge homecoming, Lampard was forced to make some tough choices with his starting XI, dropping Mateo Kovacic and Tammy Abraham in favour of Christian Pulisic and Olivier Giroud.
Despite playing 120 minutes against Liverpool in midweek, the Blues looked the sharper side as they came racing out of the blocks.
Inside the first minute of play, Pedro could have opened the scoring after being set up by Giroud but the Spaniard hit a sweet volley into the side netting.
There was more to come and Chelsea were rampant as Mount and Pulisic were both denied by Kasper Schmeichel in the space of a few seconds as Leicester struggled to contain the Blues.
But their resistance soon broke when Wilfried Ndidi was caught dwelling on the ball by Mount.
The young midfielder kept his balance and with his second touch slid his effort beyond Schmeichel.
Just a minute later, Chelsea were almost in again when Mount’s shot was spilled by Schmeichel and Pulisic was denied by the Dane.
Chelsea nearly doubled their advantage when Giroud’s clever backheel found N’Golo Kante steaming into the box but a vital block from Christian Fuchs denied the Frenchman a certain goal.
After a rocky start, Leicester finally settled but struggled to test Kepa Arrizabalaga in the Chelsea goal.
The Foxes vastly improved after the interval and James Maddison could have equalised, rounding Kepa but failing to find a pink shirt with the cutback.
With Leicester coming into the game, Lampard sent on Tammy Abraham for Giroud but it didn’t make much of a difference as the visitors grew in confidence.
Soon after, they were level.
Maddison sent in the corner and Ndidi rose high to head past Kepa to grab a deserved equaliser.