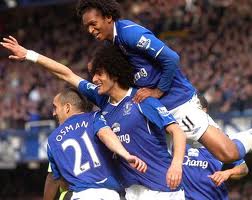 Everton lifted themselves out of the Premier League relegation zone on Saturday with a surprise 3-1 home win over Chelsea.
Following Marco Silva’s dismissal as head coach this week, Richarlison handed caretaker manager and former Everton player Duncan Ferguson a dream start by finding the net on five minutes, flicking a header past Kepa Arrizabalaga from a Djibril Sidibe cross.
The Toffees doubled their lead through Dominic Calvert-Lewin four minutes into the second half, but Chelsea were quick to respond as Mateo Kovacic netted a precise volley three minutes later to bring the visitors back into the game.
Calvert-Lewin stabbed home his second and his team’s third with seven minutes remaining, however, to secure all three points and snap Everton’s three-match losing streak.
The win saw the home side rise to 14th in the table ahead of the rest of the weekend’s fixtures.
Ferguson could barely hide his emotion throughout the match, sprinting down the sideline and hugging ball boys in celebration of Calvert-Lewin’s brace – the striker’s first in the Premier League.
Meanwhile, the result marked a second defeat in seven days for Chelsea, whose victory against Aston Villa on Wednesday followed last weekend’s loss to West Ham at Stamford Bridge.
Chelsea’s afternoon was summed up when United States men’s international Christian Pulisic – who cut a frustrated figure on numerous occasions during the game — was penalised for a foul throw in added time of the second half.
Chelsea next face Lille in the Champions League group stage on Tuesday and need a win to have a chance of progressing to the knockout phase of the competition.