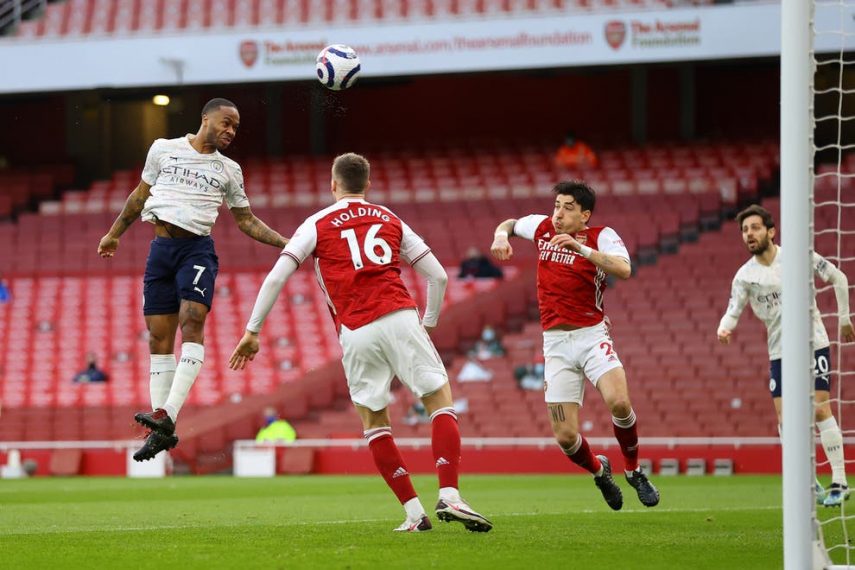 Manchester City extended their lead at the top of the Premier League table as Raheem Sterling’s early header sealed a 1-0 win over Arsenal at the Emirates on Sunday.

The victory saw City restore their 10-point advantage over Leicester City following the Foxes’ win at Aston Villa earlier in the day, while Mikel Arteta’s Gunners remain rooted in 10th place, 11 points off the top four.

City started at a blistering pace, with Sterling fluffing a volley at the back post off a Mahrez cross in the first minute – but Arsenal did not heed the warning.

Less than 60 seconds later, Mahrez found space on the right flank again and hung up a teasing delivery for Sterling to head home unmarked from six yards out.

Mahrez continued to torment Arsenal left-back Kieran Tierney inside the opening 10 minutes, but City could not add to their lead as they struggled to create clear-cut chances despite dominating possession.

The likes of Bukayo Saka and Hector Bellerin looked rushed into quick decisions by City’s relentless pressing, and Arsenal struggled to retain the ball or mount any sort of sustained pressure inside the opening half.

Tierney sent a rising drive at goal which Ederson had to collect at the second attempt, and Arsenal grew into the game without really troubling City before the interval – though simply getting into half-time just 1-0 down would have been considered a success earlier on given how well City started.

Chances were limited after the break as City held Arsenal at arm’s length.

Though City only won by a single goal, the gap between the two sides was pronounced.