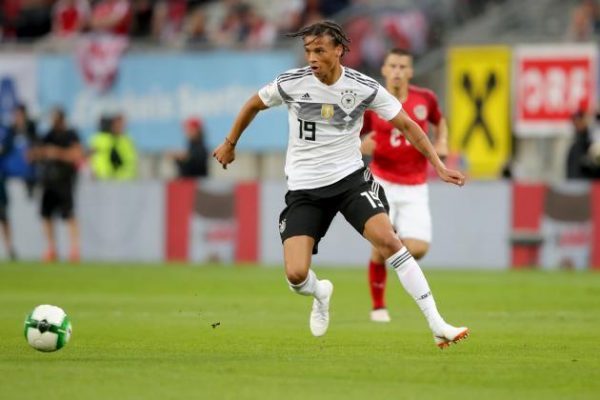 Share
Facebook Twitter LinkedIn Pinterest Email
Three first-half goals have helped leaders Manchester City earn a 4-0 victory over West Ham United in Saturday’s clash at the London Stadium.
David Silva, Raheem Sterling and Leroy Sane all found the back of the net inside the opening 34 minutes, before Sane added a second with the final kick of the game.
Pep Guardiola’s side maintain their two-point lead at the top of the standings, while West Ham remain in 13th position after Manuel Pellegrini watched his team outclassed by his former club.
West Ham started well in England’s capital, but a mistake from Felipe Anderson in his own area almost gifted Man City the lead with Silva dragging a shot into the side-netting from 12 yards out.
However, Silva soon made amends by giving his side the advantage as the Spaniard swept the ball into the far corner from close range after Sterling had been provided with too much space to deliver a cross from the right.
A second goal arrived before the 20-minute mark and in similar style, too, as Sane was allowed to send in a low delivery from the left for Sterling to get in front of Arthur Masuaku and tap home at the back post.
West Ham rallied with Marko Arnautovic scuffing a shot towards goal from inside the penalty area – only for a combination of Kyle Walker and goalkeeper Ederson to get in the way – before Michail Antonio’s first-time effort was comfortably kept out by the Brazilian stopper.
City were not placing much emphasis on trying to pick off West Ham at the back but each time that they did attack, the visitors looked a threat and a third goal inevitably arrived soon after the half-hour mark.
A floated pass found Sterling on the right-hand side of the area and after the winger’s volleyed cross picked out Sane, the German took a touch before being able to tap into the net with Lukasz Fabianski having already been deceived.
City picked up where they had left off soon after the restart and should have netted a fourth through Sane, but the winger’s shot from 12 yards out was parried by Fabianski down to his left.
However, West Ham were still showing ambition going forward and the home side should have pulled a goal back just before the hour mark when Javier Hernandez’s through-ball found the run of Antonio, but the attacker’s eventual shot struck the outside of the post and went wide.
The visitors went back onto the offensive with Sane forcing a smart stop out of Fabianski inside the area, but West Ham continued to squander chances at the other end with Arnautovic and Fabian Balbuena failing to hit the target with headed chances.
Things went from bad to worse for West Ham as Arnautovic picked up an injury during the closing stages of the game, and City inflicted more misery on their hosts with a goal with the last kick of the match.
A cross from the right found Sane all on his own at the back post and after taking his time to control the ball, the winger drilled a volley into the far corner of the net from 12 yards.
David Silva Leroy Sane Lukasz Fabianski Manchester City Manuel Pellegrini Marko Arnautovic Pep Guardiola Raheem Sterling West Ham United
Share. Facebook Twitter Pinterest LinkedIn Tumblr Telegram Email