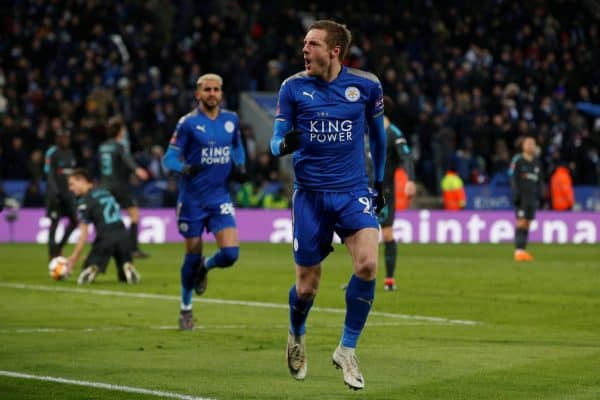 Jamie Vardy salvaged a much-needed point for Leicester in their quest to claim a place in next season’s Champions League in a 1-1 draw at Arsenal on Tuesday dominated by VAR reviews.

Pierre-Emerick Aubameyang’s strike gave the Gunners a well-deserved first half lead, but Arsenal were reduced to 10 men for the final 15 minutes when substitute Eddie Nketiah was shown a straight red card after a lengthy VAR review.

Leicester made the most of the man advantage as Vardy slotted home from Demarai Gray’s cross, but also had a nervous wait before the goal was awarded as VAR checked for offside.

Despite the late rally, Leicester have now won just once in six games since the restart to the season and drop to fourth after Chelsea won 3-2 at Crystal Palace earlier on Tuesday.

Manchester United can close to within one point of the Foxes if their scintillating form continues at Aston Villa on Thursday.

Arsenal’s own chances of a top-four finish appear gone as they remain nine points adrift in seventh.

But after a poor start to English football’s restart with back-to-back defeats at Manchester City and Brighton, there were more promising signs from Mikel Arteta’s men as his reign at the Emirates begins to take shape.

Bukayo Saka has flourished since Arteta replaced Unai Emery in December and the 18-year-old was again at the heart of an excellent first 45 minutes from Arsenal.

Saka created the opening goal as he latched onto a defence-splitting pass from the outstanding Dani Ceballos and teased Jonny Evans into falling over his own feet before laying Aubameyang’s 20th Premier League goal of the season on a plate.

But for Kasper Schmeichel in the Leicester goal, the hosts would have been out of sight before half-time as the Danish number one produced an incredible low save to deny Alexandre Lacazette in between further smart stops from the French striker and Saka.

After weathering the Arsenal storm, Leicester felt aggrieved not to go in level at half-time when Kelechi Iheanacho was penalised for a soft foul before he tapped in Vardy’s cross and this time VAR offered no assistance to the visitors.

Iheanacho was denied by Emiliano Martinez, who produced another impressive performance in the Arsenal goal since stepping in for the injured Bernd Leno, before Vardy failed to connect properly with a great chance.

Arsenal were far less potent as an attacking force after the break, but Lacazette’s frustrating night in front of goal was rounded off when he did turn in from David Luiz’s flick-on only to be flagged offside.

Seconds after Lacazette was replaced by Eddie Nketiah, the Gunners were down to 10 when the young striker’s late lunge on James Justin was deemed worthy of a red card by referee Chris Kavanagh after he came to the side of the pitch to review the incident.

Rodgers immediately threw on an extra attacking option in Gray and his cross was the service Vardy had been seeking all night as turned home to regain his two-goal advantage over Aubameyang in the race for the Golden Boot.