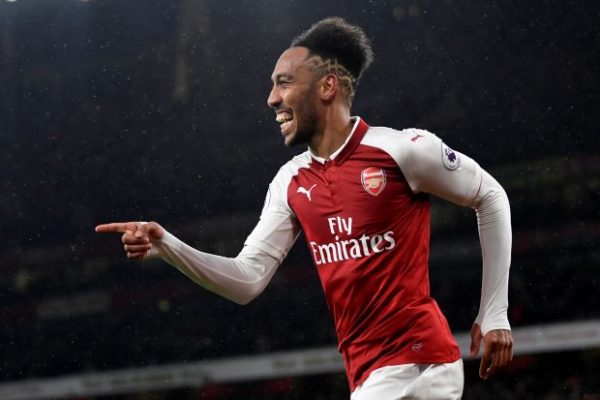 Arsenal have made it back-to-back wins at the start of the 2019-20 Premier League campaign courtesy of a 2-1 success over Burnley at the Emirates Stadium.
Ashley Barnes cancelled out an early Alexandre Lacazette effort to leave the two teams level at the break.
However, Pierre-Emerick Aubameyang came up with a 64th minute winner for the capital outfit.
The match saw Dani Ceballos, David Luiz and Nicolas Pepe all make their home debuts for the Gunners, and the former came up with two assists during an impressive performance on Saturday afternoon.
Both teams had attempts in the early stages of the contest, although neither Erik Pieters’s strike from distance nor Ceballos’s effort threatened to test the opposition goalkeeper.
Arsenal were on the front foot in the opening exchanges despite Burnley’s threat on the break, and Matthew Lowton almost turned a corner into the back of his own net in the 11th minute during a spell of pressure.
Nick Pope then had to make a wonderful save to keep out a close-range header from Lacazette – the centre-forward, though, was not to be denied from the resulting corner.
Indeed, Lacazette gathered the delivery from Ceballos before freeing himself and finding the back of the net through the legs of Pope. It was poor defending from the Clarets, though, and head coach Sean Dyche would have surely been disappointed with the manner of the goal.
The response from the visitors was impressive, however, with a series of dangerous balls into the Arsenal box causing Bernd Leno and Arsenal’s back four a number of problems.
Burnley were attempting to find Chris Wood from wide positions, but Luiz was impressing for the Gunners as he continued to win the aerial duels inside the penalty box.
Arsenal had the chance to double their lead in the 36th minute when Reiss Nelson broke into a shooting position before trying his luck, only for Pope to make the save before Ben Mee completed the clearance.
Pope made another smart stop in the latter stages of the first period to keep out a low strike from Matteo Guendouzi, and Burnley levelled the scores moments later.
Indeed, a strike from Dwight McNeil fell kindly for Barnes inside the Arsenal box and the striker managed to settle under pressure from Guendouzi before finding the back of the net for 1-1.
The Gunners thought that they had retaken the lead late in the first half when Nelson struck home from close range. However, the offside flag was raised and the resulting VAR check confirmed that the decision was correct, leaving the two teams level at the interval.
Pepe replaced Nelson at the interval as the Ivory Coast international was handed his home debut for the Gunners, who were looking to make it back-to-back wins at the start of the campaign.
Aubameyang had the first serious chance of the second period after finding space in a shooting position, but the Gabon international just missed the top corner with his strike.
Unai Emery’s side were forcing the issue as the match approached the hour mark. Burnley, though, were still causing problems with their pace and movement in the final third of the field.
Pope had to make another smart save to keep out a strike from Aubameyang just before the 60-minute mark, before Jay Rodriguez was introduced for Wood in Burnley’s first change of the match.
The Burnley goalkeeper had a busy afternoon and had to prevent a Ceballos curler potentially finding the back of the net in the 62nd minute during a strong spell for the home side.
Arsenal scored a second in the 64th minute, though, with Aubameyang driving to the edge of the Burnley box before finding the bottom corner with an excellent strike. Ceballos had regained the ball in midfield before feeding the attacker, who swept the ball past Pope.
Both managers made alterations in the period that followed but the opportunities dried up with Arsenal’s narrow advantage still standing heading into the final 10 minutes.
Burnley had a couple of half-chances from long balls late on – it proved to a comfortable conclusion for Emery’s side, though, and there could have been more goals for the hosts late on with Lucas Torreira and Aubameyang both having opportunities for 3-1.
Next up for Arsenal is a trip to Liverpool next weekend, while Burnley will attempt to return to winning ways when they travel to Wolverhampton Wanderers.