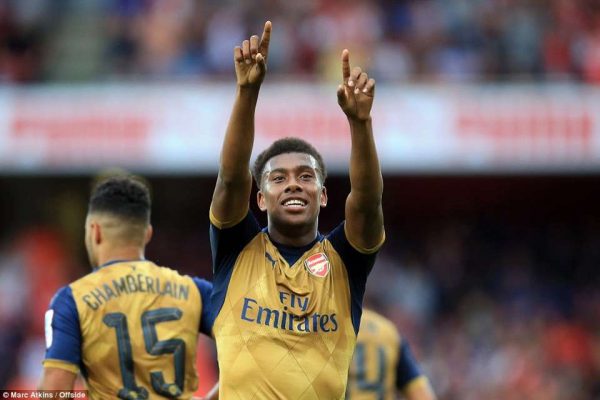 Nigeria’s Alex Iwobi is expected to make his Everton debut as they battle Crystal Palace in the Premier League this afternoon.
The forward on transfer deadline sealed a late deal with the Torres which ended his stay at the Emirates Stadium.
Toffees supporters are on a high after what can only be described as a productive transfer window, one which has seen seven players come through the door.
While Marco Silva has spoken openly about his disappointment of failing to sign a new centre-back, the Portuguese has been quick to praise the club’s efficiency in the market when they are attempting to break into the top seven of the standings.
Everton – like Palace – recorded just one win during their pre-season campaign, but Silva will be eager to take advantage of the opening half-a-dozen fixtures having avoided each of “the big six”.
As for Crystal Palace, the beginning of the new season is supposed to be an occasion when all of a club’s star men are on show, but Roy Hodgson has a decision to make regarding his selection of Wilfried Zaha.
Despite his affinity with Crystal Palace, the wideman has spent the majority of the week envisaging a scenario where he would be representing Everton at Selhurst Park.
Given the club’s failure to significantly improve their forward line, Hodgson must now make the call over whether it is worth risking Zaha in such a game, potentially contemplating whether this is an opportunity to nip some of the negative talk in the bud.
Palace find themselves in desperate need of a positive result having lost for of their six pre-season fixtures, and a win with Zaha in the side would go a long way to getting matters both on and off the pitch back on track.