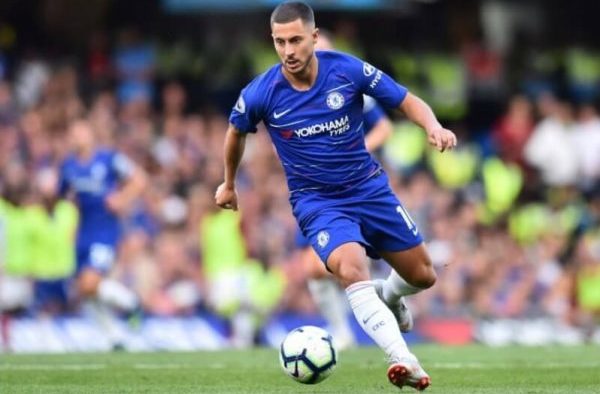 Eden Hazard has scored twice, including a contender for goal of the season, to earn Chelsea a 2-0 win over West Ham United that lifts them up to third in the Premier League.
The rumoured Real Madrid target opened the scoring 24 minutes in with an incredible individual strike that saw him carry the ball more than 30 yards and convert past Lukasz Fabianski.
Chelsea had the better of the chances but West Ham offered more of a threat in the second half, but it was left to Hazard to settle the contest late on with a powerful second.
The Blues started to make their dominance count with a little under a quarter of the match played as N’Golo Kante, finding all sorts of space high up the pitch, spun away from Angelo Ogbonna and fired over the bar.
That attempt was off target but star man Hazard lit up the match with his sublime solo goal soon after, taking the ball past Mark Noble around 35 yards from goal, knocking it between Fabian Balbuena and Ogbonna in the final third and then finishing off the move with a left-foot finish into the bottom corner of the net.
With West Ham perhaps still wondering what had just happened, Hazard turned provider as he picked out Gonzalo Higuain, who in turn found the post via a touch off Lukasz Fabianski.
Hazard then had a penalty shout turned down when barged into by Marko Arnautovic, with the referee feeling it was a simple shoulder-to-shoulder challenge, before teeing up Callum Hudson-Odoi for a blocked shot in the box.
Chelsea somehow had just a one-goal lead to show for their first-half dominance as Hudson-Odoi was denied by Fabianski after putting his foot through the ball, while Higuain’s shot – which he should have taken first time – was helped behind by Ryan Fredericks right at the end of a one-sided first half that ended without the Irons managing an attempt of any sort.
Manuel Pellegrini tinkered with his side at the interval by bringing on Robert Snodgrass for the ineffective Javier Hernandez and moving Arnautovic through the middle.
The change did not initially appear to make any difference as Ruben Loftus-Cheek drifted past Noble and Declan Rice as though they were not there, but Hazard’s shot did not have enough precision to round off the attack.
West Ham gave Chelsea a real scare 10 minutes into the second half, though, as Felipe Anderson played an early pass in behind for Arnautovic, who teed up Manuel Lanzini for the visitors’ first on-target attempt of the night.
The match became very open as Loftus-Cheek tried and failed to scoop the ball over Fabianski, a minute before Anderson’s curler was parried by Kepa Arrizabalaga, and Aaron Cresswell also came close from a bullet shot after Antonio Rudiger headed the ball into his path.
Chelsea also looked just as dangerous as they did in the first half, coming close through another Hazard shot – which Hudson-Odoi got in the way of – and substitute Olivier Giroud was also thwarted by the legs of Fabianski.
With a minute of normal time to play the home side made certain of the points, and it was Hazard who killed off the contest with his second of the night.
Ross Barkley lifted the ball into the Belgian’s path and, after a touch to settle himself, Hazard blasted it past Fabianski to make it 19 goals in all competitions this season and giving Chelsea bragging rights over their London rivals.