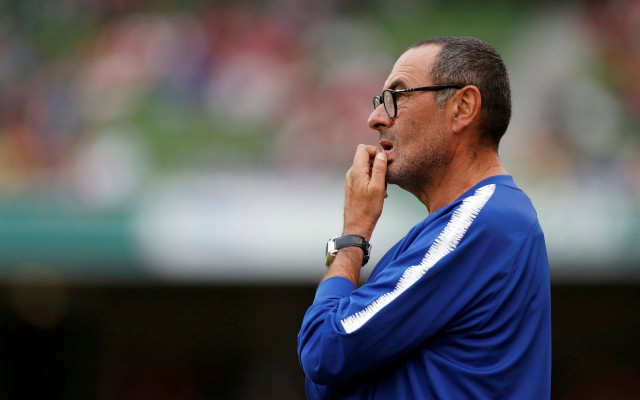 Maurizio Sarri has equalled the record for the longest managerial unbeaten streak at the start of a Premier League career courtesy of Chelsea’s 3-1 win over Crystal Palace at Stamford Bridge on Saturday.
A brace from Alvaro Morata and third from Pedro were enough for the Blues to extend their run to 11 games without defeat from the start of the season, leapfrogging Liverpool into second place in the process.
Andros Townsend restored parity for Palace at one stage in the second half, but two goals in the space of five minutes saw the hosts take the game beyond their London rivals to remain just two points adrift of leaders Manchester City.
The match began in end-to-end fashion with Palace looking to make an early impact, but it was Chelsea who created the clearest chance of the opening exchanges when Pedro failed to get good enough contact on Willian’s low cross.
It was a rare moment of genuine attacking threat from Palace in the first half, but Chelsea were also struggling to break down their opponents at the other end despite enjoying the lion’s share of possession.
The opening goal did finally arrive shortly after the half-hour mark when Morata collected Pedro’s pass with his back to goal before instinctively shooting on the turn to leave Wayne Hennessey no chance from close range.
Chelsea had the ball in the back of the net again just three minutes later when Pedro’s mis-hit shot squirmed through to Willian, but his own close-range finish was ruled out by the tightest of offside calls.
Sarri soon turned to Eden Hazard off the bench, with the Belgian returning after three games out with a back injury.
It took just a minute for Hazard to make his mark as won and then delivered a free kick which went all the way through to Morata, who took a touch before rifling a clinical finish into the bottom corner to double his tally for the afternoon.
Roy Hodgson would have been unhappy with his side’s defending for that goal, and they were sliced open again just five minutes later as Chelsea took the game beyond Palace with a third.
Marcos Alonso’s low cross from the left was left by Morata for his compatriot Pedro, who applied a confident first-time finish past a helpless Hennessey as Chelsea finally got their two-goal cushion.
Indeed, it was Chelsea who should have added to the scoring when Hazard released Morata clean through on goal from a quick counter-attack, only for Hennessey to read the Spaniard’s intentions and deny him a hat-trick by plucking his attempted lob out of the air.
It was a golden chance for Morata to silence his critics by taking home the matchball, but it did not have an impact on the result as Chelsea ran out comfortable winners to ensure that three teams remain unbeaten after 11 games of a Premier League season for the first time.
The result also means that Sarri is yet to taste defeat after 11 games in the competition.