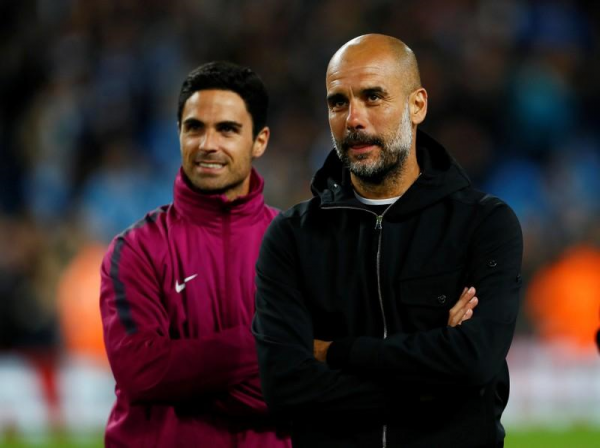 Manchester City travel to South London to face Crystal Palace on Saturday determined to get back to winning ways.
Pep Guardiola’s side fell to a disappointing defeat against Wolverhampton Wanderers two weeks ago while Palace currently sit sixth after recording consecutive wins before the international break.
The way Guardiola has set his side up means that they thrive on quick, attacking football and Hodgson has set Palace up to defend narrowly, keep things tight and stop City’s creative players like Raheem Sterling, David Silva and Riyad Mahrez from getting in behind.
In order to counter this, the Citizens will be, like Tottenham Hotspur did last month, aiming to press Palace from the off and score early, as that forces the South London side to open up a bit more and chase a key goal earlier on, which in turn then affords the away side more opportunities.
This approach seems highly likely given the club’s track record under Guardiola of responding to defeats by coming out in their next game as though they have something to prove.
City have scored eight goals this season involving more than 10 passes in the build up, and playing like that – with quick passing and lots of off the ball movement – will be key to them breaking Palace down and recording a victory.
Also in favour of Guardiola’s men is their excellent away form of late that has seen them win 10 of their last 11 games on the road.
More interestingly, the Sky Blues have a great recent record in London, leaving with maximum points on nine of their last 10 visits to the capital.
Games between these two have often involved a lot of goals, with City scoring in 15 of the pair’s 16 most recent meetings.
Although Palace are flying high in the table at the minute, today’s game marks the start of a run that sees them play the top five in successive games.
As is the often the case against the bigger sides, Roy Hodgson’s men will stick to their defensive principles, aiming to keep the game tight before going in search of a goal late on as things open up.
Key to the Eagles taking something from the match will be Ghanaian striker Jordan Ayew, who already has three goals for the season.
While his goals have been crucial, it is the former Swansea man’s workrate and physicality that will be essential against a team like City who will dominate possession and prevent him from getting many openings.
Likewise, the Eagles will be bolstered by the return of influential midfielder Luka Milivojevic, who missed their win over West Ham United after picking up five yellow cards in the club’s opening seven league games of the season.
Although Palace are entering the game as large underdogs, there are some factors pointing in their favour, such as City’s vulnerabilities at the back that were so well exploited by Norwich City and Wolves.
Additionally, Hodgson is the only English manager to have recorded a win against Guardiola during the Spaniard’s entire managerial career to date.
Were Palace to take a win from this game it would be a first against City at Selhurst Park since April 2015 and it would give them a three-game winning run for the first time in 17 months.