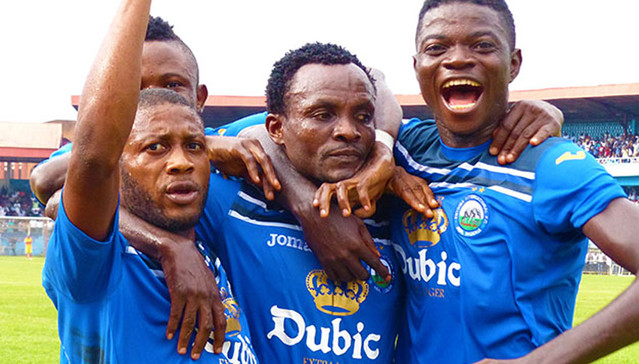 Enyimba have secured their eighth league title following their 3-0 win over Akwa United on Wednesday in their final match of the Nigeria Professional Football League Super Six.
Goals from Rueben Bala, Stanley Dimgba and Abdulrahman Bashir ensured that the People’s Elephant secured maximum points against the Promise Keepers to end the championship play-offs with an unassailable 12 points.
After a rather cautious start by both teams, Udoh almost took the lead against his former club Emyimba, but while he directed his header at goal, it was well-saved by Theophilus Afelokhai in goal.
Enyimba responded with a big chance of their own minutes later, as the left-footed free kick by Joseph Osadiaye stung the palms of Akwa keeper Emmanuel Iwu and the follow-up volley by Bashir clipped the crossbar and went over.
Both teams kept pushing for the crucial opening goal and it was Enyimba that found a way in the 43rd minute when Osadiaye got the ball across for Bala who bundled it home past Iwu despite the challenge of an Akwa defender.
Enyimba were relieved to take the slim lead into the break.
In the second half, Akwa United mustered all their effort to get an equaliser but against an Enyimba team that had the best defensive record during the regular season, they just did not find a way through.
While the Promise Keepers threw in all their energy going upfront to save their failing campaign, they were further punished in the 89th when Bashir picked up a loose ball and smashed it from distance past Iwu to put the icing on the cake for Enyimba.
On the hour, the People’s Elephant extended their lead when Dimgba peeled off a ball-watching Akwa defence to head past goalkeeper Iwu from Stanley Okorom’s cross.
With this 3-0 win, Enyimba finished the season on 12 points, making sure nobody can catch them.