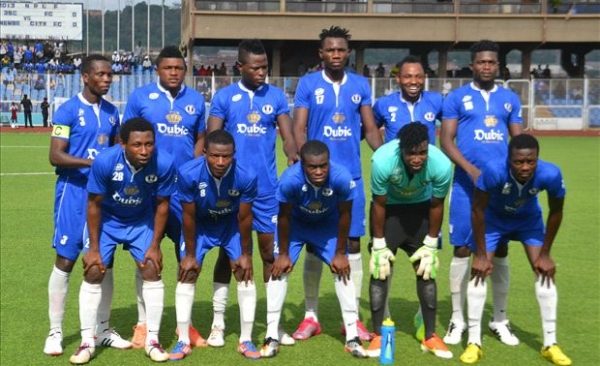 The former African champions have played home games in both the Nigeria Professional Football League and continental competitions at neutral venues since 2015.
The News Agency of Nigeria reports that this was when renovation works started at the Enyimba International Stadium in Aba at the end of the 2014/2015 season.
With renovation works at the stadium now almost completed and the facility ready to host games again, the club has staged a return to base.
The players had a feel of the newly-laid artificial surface on Friday, and club officials were quick to take to the social media to express their feelings.
“First training session inside our revamped stadium. Couldn’t have felt any better.
“18 days until we play our first competitive game on this incredible surface. #WeCantWait #WeAreEnyimba #ForVictory,” a tweet on the club’s official Twitter handle proclaimed on Friday.
NAN reports that Enyimba will host their next home game in the 2018 CAF Confederation Cup group phase against CARA Brazzaville of Congo on August 29 at the stadium.
The two-time African champions sit in third place in Group C with six points behind Côte d’ Ivoire’s Williamsville Athletic and CARA Brazzaville of Congo.
Enyimba’s next game is against Mali’s Djoliba on August 18 at the Modibo Keita Stadium in Bamako.
Meanwhile, the Abia Governor, Okezie Ikpeazu, has donated 5,000 dollars to the team to boost the players’ morale ahead of the game against Djoliba.
A tweet on the club’s Twitter handle disclosed that Ikpeazu made the donation after watching the team’s training session at the stadium.
The tweet said: “The Executive Governor of Abia State, Okezie Victor Ikpeazu was on hand to watch the team’s training exercise and surprised us with a $5,000 donation, reaffirming his continued support for the club now and in the future. Thank you Sir!”