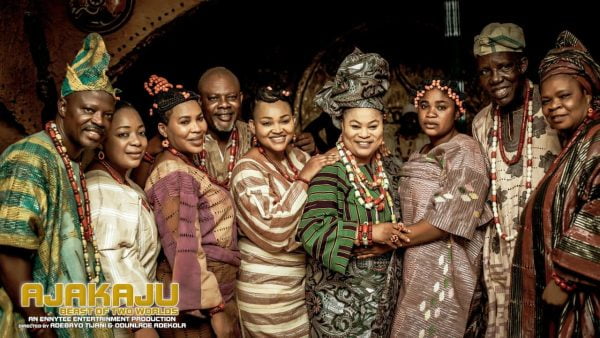 Nollywood movie lovers are in for a big treat as award winning actress and Producer, Eniola Ajao, has raised her game with the production of what many expects to be a masterpiece judging by the quality of minds on the project.

The just completed project: “Beast of two worlds – ÀJÀKÀ’JÚ,” is the story of a powerful lady, ÀJÀKÀ’JÚ, who is both human and an animal.

She bestrode the forest at night, making lives difficult for hunters, killing and maiming some of them.

She also destroys crops and cripples the economy of the town.

The king, Towobola, went into the forest to confront ÀJÀKÀ’JÚ.

After the epic battle, the king and ÀJÀKÀ’JÚ reached a pact to marry each other with the hope that ÀJÀKÀ’JÚ would bear male children as all kids borne for the kings are females.

True to hope, ÀJÀKÀ’JÚ gave birth to a son but threw the boy, who is now the hope of continuation of the lineage of the king, into fire.

The move led to twists and turns that made the plots of the movie entertaining, daring and suspense-filled.

Speaking about the movie, Eniola said: “I am not sparing anything to make this movie a hit and it will surely hit the cinema this December.”

She revealed that it cost over N52 million to get the film to the cinema.