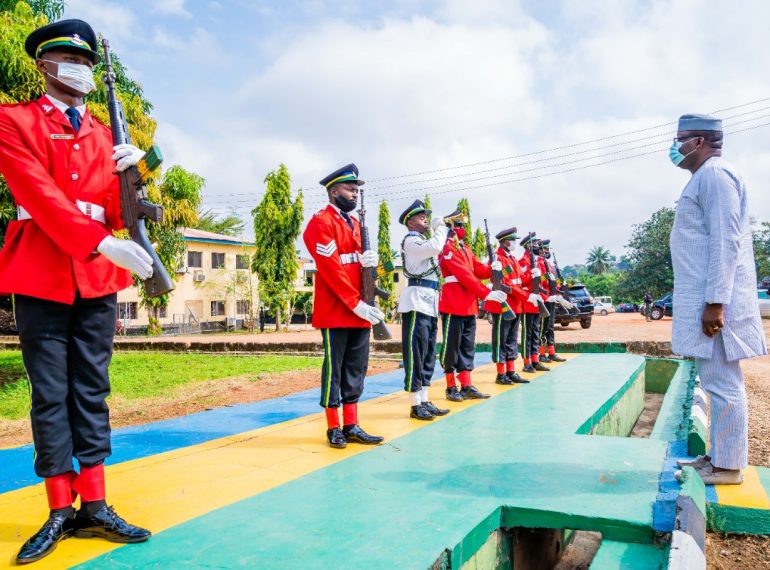 The Ekiti State Governor, Dr. Kayode Fayemi, has said the professionalism displayed by officers and men of the Ekiti State Police Command was responsible for the relatively low level of destruction during the recent #EndSARS protest in the State compared to the mayhem experienced in other parts of the country.

Fayemi stated this on Wednesday while addressing officers and men of the State Police Command during a solidarity visit to their headquarters in Ado Ekiti to commiserate with some of them who were victims of the #EndSARS protest.

The Governor, who reiterated his commitment to police reforms and welfare, said he was working with the Inspector General of Police, Mohammed Adamu, on how to develop a frame work of engagement with police officers across the 36 States on matters bothering on efficiency, accountability and responsiveness.

He urged officers who were injured, molested or lost personal properties before or during the #EndSARS protest to file their petitions before the State Judicial Panel of Inquiry for justice and compensation, adding that the panel was not out to witch hunt anybody.

The Governor, who was accompanied by the Attorney General and Commissioner for Justice, Wale Fapohunda, and Special Adviser on Security Matters, Brigadier General Ebenezer Ogundana (retd), commiserated with the Ekiti State Commissioner for Police, Tunde Mobayo, over attacks on police personnel and destruction of some stations and operational vehicles.

Fayemi commended the officers for exercising restraint despite the violence visited on police formations by hoodlums who hijacked the protest.

The Governor, who had earlier in the month carried out an assessment tour of Police facilities destroyed in the State, assured the officers and men of government’s commitment to efforts at putting the razed police stations back to use within the shortest possible time.

He said: “We have had a very unfortunate experience across the length and breadth of the country.

“Some will even argue that our experience here is mild in comparison to what transpired in other parts of the country.

“But I think the mildness of the situation in Ekiti could be traced to the manner, the responsibility, tact and restraint that you applied as police officers and men in dealing with the EndSARS protesters in the State.

“Any officer of the Police Force that the panel clearly confirmed to have been a victim of attack would also be a beneficiary of the compensation that we have put in place because you cannot be protecting us and be at the risk of your own life in the course of protecting others.

“I have been in discussion with the Commissioner of Police, the Inspector General of Police has also informed me that he is sending a team to go round those places that were affected and to come up with a report.

“We would await his own report and synergise our actions in order to ensure we put those police stations back to use within shortest possible time.

“Police reform, civil engagement, military relations, security sector governance those are issues that are personal not just political interest and what we can do to make sure that our police authorities are more efficient at what they do and more responsive to the yearnings of the populace is where you will find me.

“As Chairman of all Nigeria Governors’ Forum, I have been working with the IG in order to come up with a framework of engagement in all the States with Police Officers and Men.

The Governor also disclosed that he had directed a statewide Police patrol to forestall and deter criminal elements from perpetrating evil during the ember months.

He promised that more vehicles would be provided for the Command to enhance their responses to public safety.

Earlier, Mobayo had commended the State Governor for his quick intervention during the #EndSARS protest.

He commended him for making immediate visitation to police facilities that were vandalised and razed in Ikere, with a view to assessing the level of damages done to the facilities.

Mobayo revealed that though no personnel was killed during the protest, two police stations were razed and one Area Command, all in Ikere, were vandalised.

He added that a total of five police vehicles across the State were vandalised.