The Founder and Senior Pastor of Daystar Christian Centre, Lagos, Dr. Sam Adeyemi, has joined the list of prominent Nigerian clerics who are in support of the #EndSARS protest across the country.

The clergyman urged Nigerian youths to take advantage of the #EndSARS protest to secure deep change for the nation’s development.

He spoke via his official Twitter handle as the protest seeking the scrapping of the Federal Special Anti-Robbery Squad spread around the country.

According to Adeyemi, the police officers causing the youths trauma are also dehumanised by the system.

He tweeted: “Rarely does a generation have the opportunity to lead change as the one handed the youths of Nigeria right now through #SARSMUSTEND.

“It cuts across the fault lines that divide Nigeria.

“Dear young citizen, you must use this rare opportunity to secure deep changes that will lead to Nigeria’s development.

“The systems you confront are strategic and tactical.

“They may be steps ahead. You need to think long term and pace yourself.

“Speak forcefully but peacefully. Don’t be provoked to violence.

“Lightning has enough power to light a city, but it destroys because it has no structure.

“Shift gear into participation in the political process when the time comes soon.

“Police officer causing you trauma is also dehumanised by the system.

“He is paid peanuts and forced to extort money to make his uniform, maintain operational vehicles and retire some to bosses.

“Fight for him and his children.

“The generation before yours had such an opportunity 26/27 years ago when the result of a free and fair election was annulled.

“The protests that ensued partly birthed the democracy we enjoy today.

“Hold the vision of a developed Nigeria in your heart.

“Feel their pain and frustration. Make firm decisions and act.

“Then speak to the young ones from your heart as a father. God will help you. SARSMUSTEND.”

Adeyemi’s posts caught the interest of singer, Adekunle Gold, who offered to treat the clergyman to a cold beer.

Gold tweeted: “Oloun, I for say Give Pastor Sam one cold beer but…”

Responding to the offer, Adeyemi playfully asked how chilled the beer was but declined.

Adeyemi tweeted: “Ah! AG. Lead us not into temptation o. How chilled is it? No, don’t worry. Thanks a lot!” 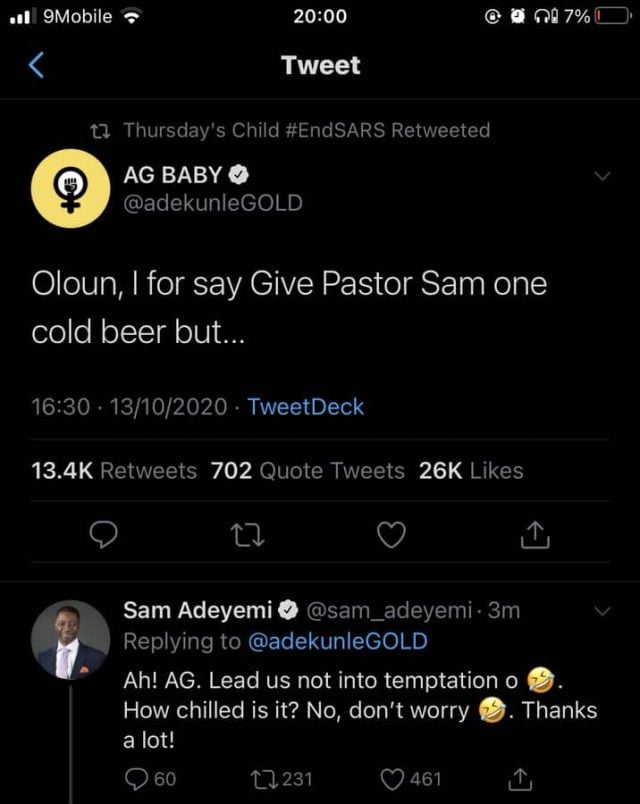 Osimhen returns with a big bang