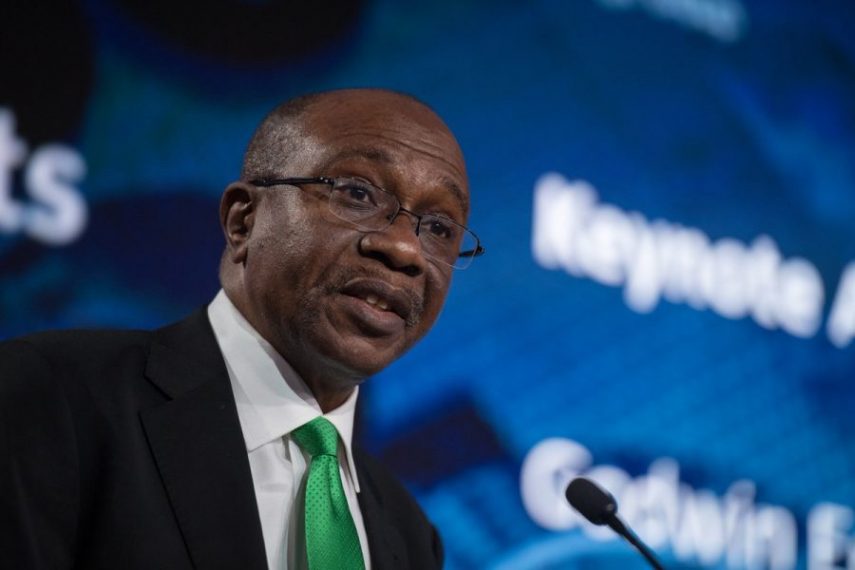 The Governor, Central Bank of Nigeria, Godwin Emefiele, has faulted claims in certain quarters suggesting that the Bank’s targeted interventions in the agricultural sector are tilted in favour of a certain section of the country.

Emefiele made the clarification in Ado-Ekiti, Ekiti State on Tuesday when he unveiled the 2020 wet season harvest aggregation and flag-off of the 2021 wet season input distribution in the South West under the CBN-Rice Farmer Association of Nigeria Anchor Borrowers’ Programme.

According to him, contrary to views held by some individuals and interest groups, the Bank’s interventions in the ABP were not only about rice production, but expanded to over 21 crops and evenly spread across the country.

Describing criticisms against the Bank’s effort at boosting agriculture in Nigeria as unfair, he disclosed that more than N300 billion had been disbursed to companies operating in the southern part of Nigeria, citing companies and farmers across Lagos, Edo, Ondo, Ogun, Osun, Ekiti, Bayelsa, Rivers and Cross River States as major beneficiaries of the Bank’s interventions.

While acknowledging the current challenges in attaining food security in Nigeria, he said synergy among stakeholders will surely catalyse the growth process, assuring that the CBN stood ready to offer effective partnership to deliver on this critical national mandate of attaining self-sufficiency in food production.

According to him, the sustainability of Nigeria’s current efforts in agricultural production can only be guaranteed if youths are attracted into agriculture as they remain the future of the Country.

He therefore enjoined Nigerian youths to embrace agriculture, noting: “They have the talent, energy, enthusiasm, technological adoption capacity and all the right drive to revolutionise agricultural production in Nigeria.

“We must meet them half-way to ensure that we provide the enabling environment to make agriculture attractive to them.

“The Central Bank of Nigeria stands ready to support youths that are willing to engage in agriculture.”

The CBN Governor disclosed that a total of 3,107,890 farmers had been financed for the cultivation of 3,801,397 hectares across 21 commodities through 23 Participating Financial Institutions in the 36 States of the Federation and FCT, from the inception of the programme till date.

Emefiele equally disclosed that the Bank planned a minimum one million hectares of rice through a combination of RIFAN farmers and prime/private anchors for each planting season in 2021.

While also unveiling aggressive production plans for maize, wheat, soybeans, cassava, sorghum and cassava, he noted that the Bank’s backward integration drive with rice millers was also gaining momentum as the CBN intends to finance some millers to grow their own paddy during the current wet season.

The CBN Governor also restated the Bank’s resolve to partner with the fiscal authorities to ensure the integration of Nigerian farmers into the Government’s Economic Sustainability Programme aimed at providing five million homes with electricity using solar energy.

He also urged famers to repay their loans in order to sustain the ABP.

He explained that under the programme, every farmer with a good repayment record in the Anchor Borrowers’ Programme would be eligible to get a solar home system that will provide electricity to power their essential home appliances.

According to Emefiele, the Bank will develop a repayment framework that will allow farmers to use their farm produce as repayment for the electricity consumed by the beneficiaries of the scheme.

This is even as he expressed hope that the incentive would improve the standard of living of farmers in Nigeria, motivate prompt loan repayment and ultimately enhance the sustainability of the programme.

He said: “Loan repayment is the hallmark of every credit cycle and the sustainability of the programme is hinged on farmers’ ability and willingness to repay their loans, and we are constantly engaging with them to enhance their trust in the system.”

Unveiling what he described as the first ever grain pyramid in the South West, Emefiele also expressed strong optimism that the event would generate the required momentum to catalyse rice cultivation in the region and provide a sustainable source of paddy for the numerous rice mills springing up in the geopolitical zone and its environs.

While reiterating the massive potential in Nigeria’s agricultural sector, he stressed the need for more private sector investment in the agricultural value chain, noting that significant improvements in domestic production of staple food items, would help in attaining the country’s price stability goals while reducing its dependence on imported food items.

The CBN Governor further revealed that the revamped Nigeria Commodity Exchange, into which the Bank and its partners had committed the sum of N50 billion, will commence operation by the fourth quarter of 2021.

According to him: “A vibrant commodity exchange will significantly enhance post-harvest handling, guarantee effective pricing for farmers, minimize the adverse effect of middlemen and commodity hoarders and ultimately transfer the gains from primary production to other nodes of the value chain.”

In his remarks, the Governor of Kebbi State, Senator Abubakar Atiku Bagudu, who represented President Muhammadu Buhari and doubles as the Vice Chairman, National Food Security Council, said the rice pyramids unveiled in Ekiti State underscored the clarion call by the President for Nigeria to “produce what we eat and eat what we produce”.

While commending the Ekiti State Governor, Dr. Kayode Fayemi, for cueing into the rice revolution, he said each state in Nigeria had the capacity to produce rice, hence the need for states to compete to develop their respective potential.

Bagudu disclosed that over 50 new rice mills had come on board in Nigeria, signaling that the country was drawing closer to its quest for self-sufficiency in food production.

According to him, the recently released data by the National Bureau of Statistics indicating a downward trend in inflation, was indicative of the strong performance of the agricultural sector, which he also noted was responsible for the quick exit of Nigeria from two successive recessions.

While recalling that Ekiti State used to be the leader in rice production in the South West, Fayemi declared that the State was determined to reclaim its pride of place as a leading producer of rice through the empowerment of a new generation of farmers in collaboration with the RIFAN.

He said his administration was determined to institutionalise commercial agriculture and make it more profitable to the populace.

He added that Ekiti State was committed to changing the narrative by reviving agriculture and transforming subsistence farming to commercial production across different crops with the aim of creating job opportunities for farmers and other sectors of the economy.

In their various remarks, the Governors of Ondo (Rotimi Akeredolu), Jigawa (Mohammed Badaru Abubakar) and Osun (Adegboyega Oyetola) stressed the need for greater attention to be given to agriculture import substitution, even as they commended the CBN Governor for his vision in putting the country first by supporting agriculture.