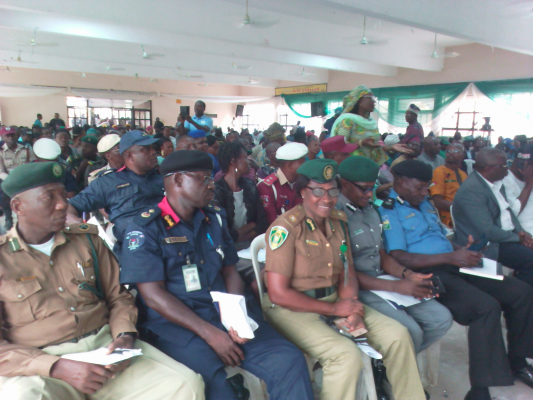 The Commissioner of Police in Lagos State, CP Zubairu Muazu, says the security agency is working with the judiciary to ensure persons arrested for offences on election days are tried immediately.
Muazu disclosed this at a Stakeholders Meeting organised by the Independent National Electoral Commission in Lagos on Tuesday, ahead of the upcoming general elections.
He said: “We expect all the political parties to educate their supporters and agents on the dos and don’ts on election days.
“Any offence committed against the electoral Act will be properly dealt with by all the security agencies.
“Security agencies are not going to condone any political thuggery.
“Anybody found breaching any electoral law will arrested instantly and dealt with according to the law.
“We are working in conjunction with the judiciary; we have Magistrates assigned to us for that purpose.”
According to him, judicial proceedings will commence immediately an arrest is made and the security agencies have patrol in place to enforce restriction of movement.
The Police Commissioner said that there would be adequate security at the polling units and collation centres to avoid intimidation and hooliganism by political thugs and miscreants.
He said: “Providing security is the role of security agencies in elections. There will be no miscreants around the polling units so as to allow Nigerians to cast their vote without intimidation.
“We are very prepared. I want to assure Lagosians that Nigeria Police Force and other security agencies are working day in day out to ensure that we provide a very safe and secure environment for Lagosians to cast their votes.
“Our duty is to provide for election materials and officers, provide security at the polling centres, collation centres, escort results to collation centres, for all these duties I assure you we have enough personnel to do them.
“Every political political office holder, who is entitled to security aide will not be entitled on that day to avoid security aides intimidating voters at the polling units.”
He said that the security agencies would ensure that electoral officers are not molested in any form.
In his remarks, Sam Olumekun, the Resident Electoral Commissioner of INEC, said the commission was ready to conduct free, fair, credible and acceptable elections.
Olumekun said that the commission would be very plain and transparent during the elections and that INEC had introduced more measures to make the process transparent.
The INEC boss noted that the commission had improved its logistics for movement of materials and personnel.
He said the electoral body aimed at 100 per cent early arrival of materials at polling units and commencement of voting by 8:00am.
This, he said, was to ensure everybody exercises his or her franchise.
According to him, security remains a key issue in elections.
He said INEC, with the assistance of the Inter-Agency Consultative Committee on Election Security involving all security agencies, had mapped out flash points.
He said: “The cardinal objective is to conduct credible and peaceful general elections for Nigeria in 2019 with an acceptable outcome that will inspire the confidence of Nigerians and stakeholders.
“A badly conducted election is a recipe for chaos, while a well conducted election fosters peace and political stability.
“There can be no peaceful or sustainable political transition and the consequential economic and other benefits to citizens without credible and peaceful elections through a transparent and inclusive electoral process.
“In order to achieve this goal, all stakeholders, governments, election administrators, security agencies, civil society groups, the media, political parties, candidates and their supporters, women, youths, persons with disability and minorities must play their part.
“This must be consistent with the provisions of the law and in tandem with best international practices. INEC is committed to credible elections.
“We will do everything within the ambit of the law to ensure that your votes count.
“We are determined to conduct our best elections ever in 2019.”
According to him, the commission will install trackers in the vehicles conveying sensitive materials to forestall any attempt to hijack or divert them.
He commended the stakeholders for adequate sensitisation and mobilisation of citizens in the build up to the elections.
Stakeholders took turns to ask several questions pertaining security, number of Permanent Voter Cards distributed, number of polling units, engaging members of transport unions to move materials, among others.
Responding to allegations that INEC had created additional polling units in the state, Olumekun said it was not so.
He said that the commission did not create any polling unit but only created voting points at polling units with more than 750 registered voters.
According to him, there are 8, 464 polling units and 4, 861 voting points (attached to the polling units) where new registrants can vote, saying the total number of places where people can vote in Lagos State stands at 13, 325.
The State Coordinator of the National Youth Service Corps, Muhammed Momoh urged the stakeholders and party supporters to be patient with corps members and ensure their safety and security.
The Lagos State Sector Commander of the Federal Road Safety Corps, Hyginus Omeje, told newsmen that the corps would enforce movement restriction.
Omeje said that the corps would check vehicles to be used for the movement of electoral materials and personnel for minimum safety requirements and roadworthiness.
In his comment, Dr Qasim Akinreti, the Chairman, Nigeria Union of Journalists, Lagos State, said that Lagos journalists had prepared for elections, urging INEC, security agencies and politicians to play by the rules.
The event had several traditional rulers, religious leaders, heads and representatives of various security agencies, parties’ chieftains among others in attendance.