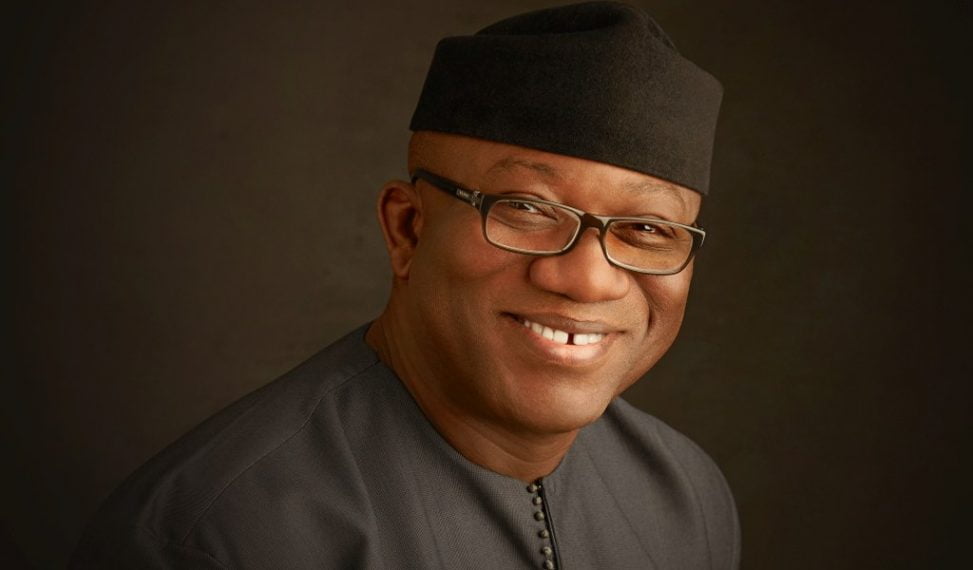 Ekiti State Governor, Dr Kayode Fayemi, has assured the people of the state that his administration would continue to make the welfare of the people especially the elderly top on its agenda.

Governor Fayemi stated this on Tuesday during the ground breaking ceremony for the construction of the elderly peoples’ resort in Ado-Ekiti.

The multi million naira elderly people resort project is being done in collaboration with the office of the Senior Special Assistant to the President on SDGs and billed for completion before the end of the year.

Governor Fayemi said the resolve and determination of his administration was to continue to create enabling environment that will provide better and sound quality of life for the elderly citizens, adding that the elderly citizens’ advice and wise counsel as well as criticisms and prayers are the tonic that give his government great impetus for success.

While commending the Federal Government through the Office of the Senior Special Assistant to the President on SDGs for approving the project, the Governor stated that the construction of the elderly people’s resort centre was one of the numerous interventions and support programmes of SDGs to the state.

He also expressed appreciation of Ekiti people for the support SDGs gave Ekiti State during the heat of the COVID-19 pandemic through the donation of medical and hospital equipment as well as the construction of Transit Home and Skill Acquisition Centre which have been commissioned.

He described the construction of the resort centre as a special intervention project in the State which serve as an avenue to showcase the state as one that strive after the welfare of its citizens.

According to the Governor, “We are here in fulfilment of our desire to not only celebrate you when you are gone to the great beyond but to do everything within our means to make your old age blissful and comfortable. This project is aimed, therefore, at promoting your social and mental well-being.

“Today’s ground breaking ceremony is in furtherance of the commitment of our administration to the welfare of Ekiti-kete, particularly, our pride, the older citizens.

“This is in line with the Goal 3 of the Sustainable Development Goals which seeks to ensure healthy lives and promote well-being for all at all ages. I have no doubt that building an elderly people’s resort and wellness centre for the senior citizens will enhance their comfort and boost their mental alertness. As a responsive and responsible government, we listened to the counsels from the elder’s council in the State, which necessitated the step we are taking here today.

“Let me at this juncture acknowledge the support and collaboration of the Federal Government through the Office of the Senior Special Assistant to the President on SDGs (OSSAP-SDGs), headed by Her Excellency, Princess Adejoke Orelope-Adefulire. The construction of the elderly people’s resort is a special intervention project in the State by the OSSAP-SDGs. This is in addition to many interventions and support programmes that OSSAP has done for us in Ekiti State which are the right steps in the right direction, hence, as a government, State and the people of Ekiti State, we remain grateful.”

Earlier, the Chairman of Ekiti State SDGs Implementation Committee,  Biodun Omoleye commended governor Fayemi and the Federal Government for the establishment of the resort centre in the state adding that it was in fulfilment of the vision of the founding fathers of the State.

Also speaking, the Special Adviser to the Governor on Development Partnership/SDGs,  Margaret Fagboyo, stated that the special intervention project was in addition to other projects granted the state under the Conditional Grants Scheme designed to provide windows of opportunity through which states and local governments access funds annually from the Federal Government.

Fagboyo explained that the initiative would further reinforce the confidence of the elders in the society and the centre would afford them the opportunity of recreation and interaction as well as help them cope with some of the challenges of old age.

In their goodwill messages, the Chairman, Ekiti State Council of Elders, Prof. Oluwasanmi; Chairman, Ekiti State Traditional Council/ the Alawe of Ilawe Ekiti, Oba Adebanji Alabi;  and the Catholic Bishop of Ekiti State, Most Rev’d Felix Ajakaiye thanked Governor Fayemi for the novel initiative which they described as unparalleled and unprecedented in the annals of the state.

They also posited that the project when completed and put into good use would ensure the comfort of our elders in the area of feeding, health, recreational leading to the elongation of their lives.