El-Zakzaky calls for unity despite differences among Nigerians 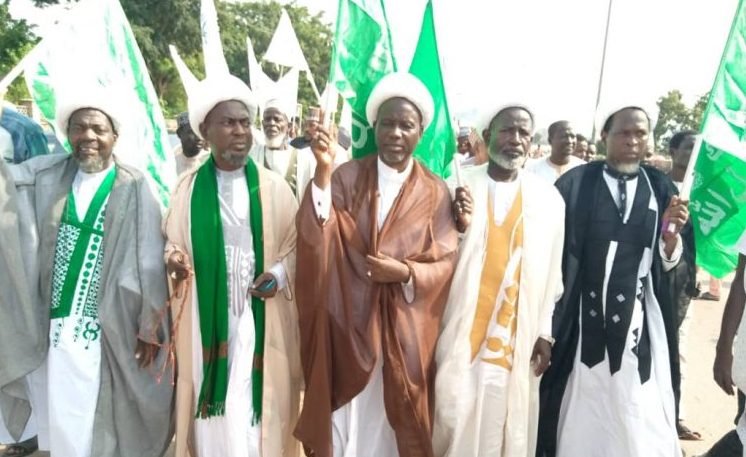 The Leader of the Islamic Movement in Nigeria (IMN), Sheikh Ibraheem El-Zakzaky, has called on all Nigerians to unite despite the differences in ethnicity, religion and language.

The IMN leader stated this on Sunday in a statement made available in Abuja by Abdullahi Musa, who is the Secretary, the Academic Forum of the Islamic Movement in Nigeria titled: “Eid-El Maulud, a Season of Unity,” to mark this year’s occasion.

“This month is a special month for Muslims and humanity in general. It is the month of the birthday of Prophet Muhammad (PBUH) who stood against tyranny and fight for justice.

“This birthday is referred to as Maulud. On that alone, it is worthy of being designated as the month of unity.

“Our leader, Sheikh Ibraheem el- Zakzaky, who was discharged and acquitted from illegal detention almost three months ago, has been calling on the Muslim Ummah in particular and the nation in general to live in unity despite the differences between us.

“He has been preaching that our points of convergence far outweigh the points of divergence in our social well-being.

“He reminded us of the well-known saying of Imam Ali (AS) that ‘people are of two kinds. They are either your brothers in faith or your equal in humanity.’

“Therefore, as we live together there are rights we need to take care of in our social coexistence.

“Some people become apprehensive when the issue of unity among the Muslim Ummah is mentioned, thinking that unity demands that they abandon whatever they hold dear in the Islamic faith.

“However, in reality this is not the main focus of unity among Muslims; it is all about understanding each other, and working together for the benefit of the Ummah at large,” he said.

El-Zakzaky also called on the Muslims to “unite themselves to defeat the abominable plan of sowing the seeds of discord between the Muslim Ummah in the name of Shi’a/Sunna sectarian divide.”

According to him, we should always remember the wise saying of Imam Khomain of blessed memory that those seeking to divide the Muslim Ummah in the name of defending Shia or Sunna are neither Shiites nor Sunnis.

“Hence we condemn with strong terms the recent bomb attacks on Shi’a mosques in Afghanistan causing the death of close to a hundred innocent worshippers in two Friday mosques.

“At this juncture, it’s sad to note that the Muslim Ummah suffer most in the various terror attacks and the so-called banditry plaguing Northwest and Northeast of the country.

“This might not be unconnected to the ploy of global arrogance to plunge the Muslim Ummah into chaos, so that they can have a field day stealing their natural resources.

“We urge the Muslims to unite and defeat this monstrous conspiracy against them,” he added.

He recalled the event in which the IMN followers were attacked by the Nigerian army.

“In conclusion, even though we are in a celebratory mood, we will never forget the calamity that befell the Muslim Ummah on the first day of Rabi’ul Awwal 1437, when the Nigerian Army embarked on a murderous mission against Shaikh el-Zakzaky (H) and his followers  in Zaria, killing 1000+, maiming hundreds and destroying places of worship and Islamic centres of learning, which led to the incarceration of the Sheikh, his wife and several others in hundreds.

“The latest in their attempt to annihilate the Islamic movement is the brutal killing of Muslims by the police during Arbaeen symbolic trek in Abuja last month.

“Why shouldn’t we mourn that genocide, when Sheikh el-Zakzaky (H) is the champion of unity among the Muslims and even their non-Muslim neighbours?

“Why shouldn’t we mourn when Sheikh el-Zakzaky (H) the torch bearer of Maulud celebration is still being denied his freedom to travel abroad for proper medical treatment upon all that has been done to him unjustly?

“We therefore call in the strongest term for the prompt release of his international passport and that of his wife Malama Zeenah Ibraheem,” Musa said.

The IMN procession to mark this year’s Maulud started at exactly 3:00pm on Sunday from Utako Market and ended  peacefully at Sky Memorial.

“This is another evidence that all rallies, protests and processions organised and carried out by followers of Sheikh el-Zakzaky on different occasions in Abuja for the past five years were peaceful unless the security operatives attack and violate the fundamental rights of innocent citizens,” Musa said.