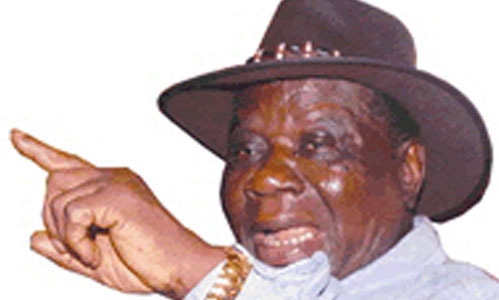 Southern leaders under the auspices of the Southern Nigeria Peoples Assembly on Tuesday ‎slammed President Muhammadu Buhari over what they described as his lopsided appointments and selective fight against corruption.
Speaking at a meeting of the Elders Council held in Akure, the Ondo State capital, the SNP, led by elder statesman and former Federal Commissioner for Information, Chief Edwin Clark, although expressed support for President Buhari’s fight against corruption, kicked against it being selective.
Leaders of the council who also joined Chief Clark at the meeting were the Chairman of the Presidential Advisory Committee on the 2014 National Conference, Senator Femi Okorounmu; leader of the South West Delegation, Rt. Rev. Emmanuel Gbonigi‎; former Vice President, Alex Ekuweme; Third Republic senator, Ngoji Denton-West; former Minister of Transport and Aviation, Chief Ebenezer Babatope; Prof. Ikechukwu Madubuike; Dr. Kunle Olajide; and former military Administrator of Akwa Ibom State, Ndongesit Ikanga.
Others were Senator Tony Adefuye; former Lagos State Deputy Governor,‎ Senator Kofoworola Bucknor-Akerele; and Prof. Olu Agbi among others.
Speaking at the meeting, Chief Clark said: “The resolve of President Buhari’s administration to wage a decisive war against corruption which is essential to put Nigeria on the global map of business friendly nations that will earn the country prosperity is a most welcome development.
“However, it is important to state that the dialectics of corruption, as pervasive as diverse, require a holistic fight to tame its pervading scourge. Thus, it must not be seen to be selective and limited to some perceived political enemies and foes to score cheap political points.
“For Nigeria to succeed in the war to eliminate the cancerous spread of this malaise, all those who contributed in one way or another to ruin the prospects of a great country like Nigeria and have brought us to this despicable position should be made to account for their actions.
“It is only when the battle against corruption is genuinely and seriously fought without fear of favour that endearing legacies of a transformed country could bequeathed to future generations.
“As Nigerians, we are all equal without regard to race, creed and tribe. It is therefore my candid appeal to President Buhari to live his priceless mantra ‘I belong to everybody, but‎ I belong to nobody’ in the manner, that the affairs of state are conducted, regardless of who gave him 95 percent votes and 5 per cent of votes.”
In his submission, Rev. Gbonigi appealed to Buhari to be total and non-selective in the fight against corruption, going after corrupt persons in all the political parties, unsparing even his closest political associates.
The former Bishop of the Akure Anglican Diocese pointed out that justice and rule of law must reign supreme if the fight against corruption must be won.
On appointment of Buhari’s team, Bishop Gbonigi appealed that the President should ensure that ‎”no section of the country is marginalized in appointments and sighting of development projects. Elections are over and President ‎Buhari is now the President over all Nigeria and Nigerians. No section of the country should be over patronized at the expense of others. It is therefore our sincere hope that the lopsidedness in the appointment made by Mr President to date is not an indication ‎of the trend of future appointments”.
Bishop Gbonigi also condemned a “situation where the President, Senate President, the Speaker and Chief Justice of Nigeria are all from the North is not acceptable.
“The South is not subservient to the North and the situation in which only the deputies are zoned to the South is not acceptable.”
Similarly, Ekuweme, who spoke for the South East through Madubuike, affirmed that the ongoing anti-graft war of President Buhari must be holistic and not selective.
The ex-vice president also called for the restructuring of the country in line with true federalism.
On his part, Ikanga, who spoke for the South South, said except appointments are balanced, achievement will be minimal.
He recommended that the fight against corruption should go round the three tiers of government, adding that politicizing the fight against corruption is a disservice to the country.
Governor Olusegun Mimiko of Ondo State called for the implementation of the report of the 2014 National conference.
Mimiko said the total restructuring of the country will bring “us to the Nigeria of our dreams”, adding: “It will be a disaster to confine the report of the conference to the the dustbin of history.”
Vanguard.