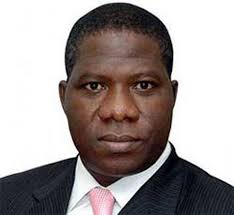 In the build up to the June 21, 2014 gubernatorial election in Ekiti State and in their continued effort at strengthening electoral processes as well as actively engaging key stakeholders, leaders and institutions in Nigeria, the United States of America’s Consul-General in Lagos, Jeffrey J. Hawkins, led his team to pay a courtesy visit to Hon. Michael Opeyemi Bamidele on Wednesday in his country home in Iyin Ekiti, Ekiti State.
Hawkins, who was accompanied by Michael Harvey, USAID Director for Nigeria; Rolf Olson of the Political/Economic Section of the US Consulate in Lagos; as well as Katrina Drayton, the Political Officer of the United States of America Consulate in Nigeria, paid tributes to Bamidele, commending his efforts towards uplifting democratic values in Nigeria and Ekiti State in particular.
Bamidele intimated the US Embassy team of his desire to get more actively involved in the development of his home state, which he hopes to achieve through laid down electoral process and affirmed his belief in realising his ambition through free, fair and credible elections.
During the visit, Hawkins also met with the leadership and stakeholders of the Labour Party in Ekiti State, led by its Chairman, Hon. Akin Omole.
The Consul-general express his pleasure for the diversity that embodies the Labour Party.
He reiterated the United States’ support for a violence free election in Ekiti State that is seen as a precursor to the 2015 general election in Nigeria.
Hawkins admonished the leaders to stand up and be counted for a credible and peaceful election whilst counting on the support of the United States of America and the American people.