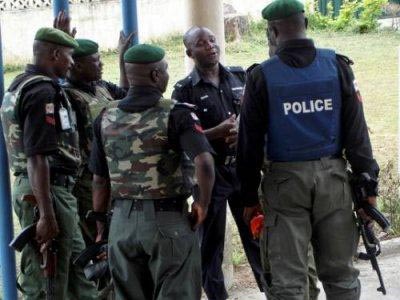 The Ekiti State Commissioner of Police, Felix Uyana, has directed governorship candidates of political parties in the state’s upcoming governorship election to get police permit before using siren and cars with tinted glasses.
Uyana gave the order on Wednesday at an emergency security meeting with the 18 governorship candidates in Ado-Ekiti on the June 21 election.
“It is illegal for any of the gubernatorial candidates in the state to use vehicles with siren and tinted glasses without first obtaining permission from the state Police Command,” he said.
Uyana said that the police was not happy with the way and manner some of the 18 gubernatorial candidates were conducting their campaigns.
He said that the command was shocked to realise that in spite of the appeals and warnings made to them in the past to avoid fomenting trouble while carrying out their campaigns, they continued to ignore such.
He said: “The incidence of politically motivated crimes such as malicious damage to posters, billboards, banners and other valuable property of fellow candidates, including attempted murder, have continued unabated.
“The menace cuts across three major political parties and from our investigation, the only deference between them is in terms of depth of involvement.”
According to Uyana, the level of intolerance so far exhibited by all political actors toward one another is unjustifiable.
The commissioner said that the command had so far recorded a total of 25 politically-related criminal cases, of which 14 had already been charged to court.
He said that the remaining cases were at various stages of investigation.
The police commissioner said it had also been observed that most of political parties and their candidates had resorted to the use of vehicles without registration numbers.
He said that others also use vehicles with siren and tinted glasses indiscriminately.
Uyana warned political parties and directors of their campaign organisations that “drivers of such party branded vehicles will be prosecuted and such vehicles will be impounded”.
He urged the political parties to preach peace and ensure that their supporters were not allowed to engage in any violence.
The Resident Electoral Commissioner of the Independent National Electoral Commission for Ekiti State, Alhaji Halilu Pai, said the meeting was to remind the various stakeholders in the election of their responsibilities in the electoral process.
Candidates of the various political parties included Ayo Fayose of the Peoples Democratic Party; Kole Ajayi of Accord Party; and Seyi Osekita of Alliance for Democracy among others attended the meeting.
The Director-General of the Kayode Fayemi Campaign Organisation, Bimbo Daramola, represented the state Governor and candidate of the All Progressives Congress, Dr. Kayode Fayemi, while leaders of the various political parties also attended the meeting.