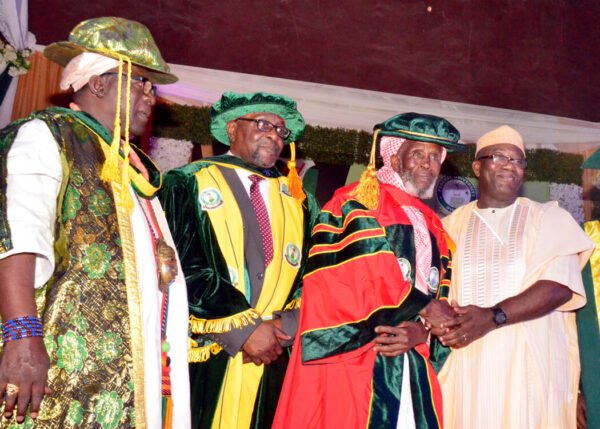 The Ekiti State Governor, Dr. Kayode Fayemi, has assured authorities of the Federal University, Oye-Ekiti that the campus’ internal roads would soon be tarred by the state government as part of his administration’s commitment to the repositioning the institution for improved service delivery.
Fayemi, who disclosed this at the University’s convocation ceremony in Oye Ekiti on Saturday, said he had approved the rehabilitation of the campus’ internal roads to ensure that the students study in conducive and serene academic environment.
He assured the University of the commitment of the state government to continue to partner the university in the drive to make Ekiti the knowledge zone of Nigeria.
Governor Fayemi said: “As a government, we are not unmindful of your challenges and efforts are in place to assuage some of them.
“Our government fully appreciates the contribution of this institution to the socio-economic development of the state.
“That is why we have offered to tar the intra-campus roads to further give it the needed aesthetic it deserves as a university.
“The process of contracting is ongoing and I am sure contractor would soon be on site.
“You can count on the support of Ekiti State Government to intervene whenever the need arises.
“You can be assured of our commitment to continue partnering with you in our quest to make Ekiti the special knowledge zone of Nigeria.”
Speaking further, the Governor, who noted that the University was yet to adopt its new name, urged President Muhammadu Buhari, who is the visitor to the university, to ensure that the renaming of the institution after a former Governor of the old western state, late General Adeyinka Adebayo, was given effect.
Fayemi said: “I hereby call the attention of the Visitor, through his representative, that the university is yet to legally assume its new name since the Visitor honoured us by renaming the university in honour of our elder statesman, the late General Adeyinka Adebayo.”
While charging the graduating students on the need to internalize the knowledge they acquire in the course of their studies, Dr. Fayemi commended the Vice Chancellor and his management team for their hard work, which has resulted in massive transformation of the university to an enviable height.
Fayemi felicitated with the Catholic Bishop of Ekiti Diocese, Bishop Felix Ajakaiye, on his conferment with the award of Doctor of Public Administration of the university, describing it as a well deserved honour.
He also hailed Imam Abubakar Abdullahi, who was also conferred with a honorary doctorate in recognition of his humanitarian intervention that saved the lives of over 200 persons when suspected bandits attacked communities in Barkin Ladi Local Government Area, Plateau State.