by The Eagle Online
in Politics
4 min read
0

The outgoing Governor of Ekiti State, Peter Ayodele Fayose, is the poster boy of everything wrong with Nigerian politics. To that end, like President Muhammadu Buhari, I should be celebrating the defeat of Fayose’s candidate Olusola Eleka of the Peoples Democratic Party by John Kayode Fayemi of our party, the All Progressives Congress, in the recent Ekiti State governorship election. But I am not celebrating it. There are very troubling failures in leadership by the president that only go to translate the outcome to a pyrrhic victory. Thusly, Muhammadu Buhari is celebrating failure, his failure.
Below is the why and how:
The most mortal sin of Ayodele Fayose is how he re-captured the seat of power in Ekiti in 2014. The government under the then President Goodluck Jonathan deployed the federal might and money to wangle Fayose back to power. Fast forward to 2018, though Kayode Fayemi deserves to win, and would have won in a free and fair election, the gospel truth is that the role of the federal might and money also tainted the outcome of the July 14, 2018 Ekiti governorship elections. The fraudulent use of law-enforcement agencies, the open buying of votes and thuggery from both PDP and APC do not represent positive change. This is a gross failure in leadership under Buhari regime and not worth celebrating.
The 2007 general election that produced Umar Yar’Adua as president offers a salutary lesson.  Recognizing that the poll was fraught with gross electoral malpractices, Yar’Adua quickly acknowledged the shortfalls and vowed drastic improvement in the electoral process. His first move was the appointment of Attahiru Jega, arguably the most independent-minded Nigerian ever to head the Independent National Electoral Commission (INEC). Yar’Adua would not live to witness the next elections, but Jega did not disappoint, as the 2011 and 2015 polls were generally adjudged as free and fair.
Enter President Goodluck Jonathan. After PDP coasted to easy electoral victory once again in 2011, it was clear that the Nigerian democracy has turned into a one-party state. Opposition activity, which is central to effective democracy, was on life support. Like Yar’Adua before him, Jonathan demonstrated patriotic leadership. He would relax the polity so that opposition could breathe again.
Ironically, though he would eventually lose to the strong opposition that he helped to create, President Jonathan conceded defeat with grace. For the first time in history, Nigeria switched power from a ruling party to an opposition. The Nigerian democracy had assumed an increasingly positive trajectory under Yar’Adua and Jonathan. And the world, including the then President-elect Buhari, hailed.
Attahiru Jega, the INEC boss, who midwifed these positive changes, was retiring. Before then, Jega had confessed that, though the Electoral Act empowers it to monitor sources and nature of funding, the “INEC does not even have a desk that handles campaign financing.” Prof. Jega prayed that successive governments should, as a matter of urgency, focus on campaign finance along with internal party democracy.
Muhammadu Buhari is the successor to President Goodluck Jonathan. Having been outspent in four consecutive presidential elections with looted funds, it was believed that Buhari had experienced the problem of money in politics more than Presidents Yar’Adua and Jonathan combined. Not many were concerned, therefore, when he (Buhari) singlehandedly appointed the successor to Prof. Jega in name of another professor, Mahmood Yakubu. But the title of the appointees, professor, is where the comparison ends.
The Buhari people do not even appear to recognize the challenges of illegal money nor the need for internal party democracy let alone how the regime can influence the enforcement of campaign laws. In other words, Buhari is currently doing the same thing he accused PDP of doing. The whole gist, if it is not already apparent, is that Muhammadu Buhari has become a political hypocrite of high order.
This is a president who came to power vowing to fight corruption. He also knows that election finance is the engine of corruption in Nigeria. It is not surprising, therefore, that the most noticeable trace of corruption Buhari has found since assuming office is the shameless looting of the $2.1 billion military budget under President Goodluck Jonathan’s regime to finance 2014/2015 elections. Unfortunately, however, now in control, the Buhari team has shown no interest whatsoever in blocking the loopholes that created the problem in the first place.
The governorship elections in Anambra and Ekiti States typically serve as a pretest to Nigeria’s general elections in many aspects. The Anambra election of November 18, 2017, which was controlled by money bags, sounded a good warning. Instead of the desired change in line with the electoral laws, the Buhari regime conveniently joined the PDP to ensure that the following election in Ekiti of July 14, 2018, was for the highest bidder. This continuing failure does not bode well for the 2019 general elections. It portends a troubling future for Nigeria’s democracy. It is, definitely, not worth celebrating.
President Buhari should, therefore, cease his outlandish celebration of a tainted victory at Ekiti and harken to emulate his predecessors Yar’Adua and Jonathan by adding to our democracy. What Nigeria needs from Buhari is a democracy where the masses, particularly the youth, have a real chance. We need a democracy where the people, instead of money, determine who wins or who loses. We direly need a president of sound egalitarian principles, who is committed to internal party democracy, so that the nominees of the parties can emerge through competition, instead of selection by a corrupt cabal. The Nigerian masses need a president who can demonstrate serious consequences for bad behavior, including electoral malpractices. Where there are no consequences for bad behavior, the bad behavior typically worsens.
. Ogbonnia, Ph.D, an APC presidential aspirant, writes from Lagos and can be reached via: [email protected]. 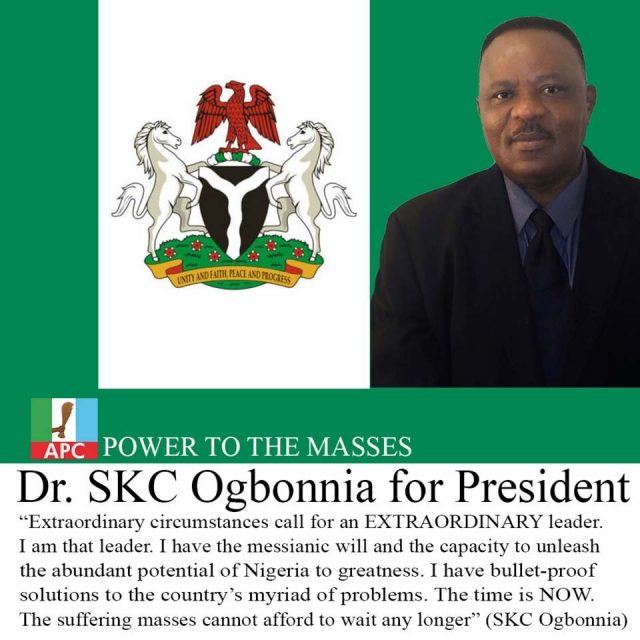 Buhari to Service Chiefs: I hope your best will be good enough for Nigeria

Despite increase in airfare, passenger traffic increases to over one million in Q1 2021