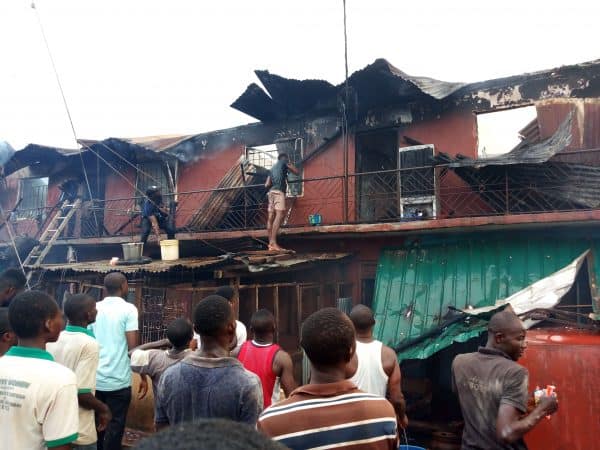 Residents in and around Nawfia Street in Abakaliki, the Ebonyi State capital, were on Tuesday thrown into panic and confusion as a storey building with about 32 rooms, housing over 16 families at 2, Nawfia Street was razed by a mysterious fire.
The building and other property consumed by the inferno were valued at about N60 million.
Eight families living upstairs were mainly affected.
The fire, according to eye witnesses, started around 1pm when most of the residents had gone out to their various businesses, leaving mainly children, nursing mothers and others whose shops were located in the building.
As at the time The Eagle Online correspondent visited the scene, the entire top floor of the building, its roof and fittings had been completely razed by the fire, while men of the State Fire Service as well as neighbours were seen making frantic efforts to prevent the fire from spreading to neighbouring buildings.
Speaking to newsmen, some of the affected residents who summoned courage, including Ogbodo Michael, Bridget Ogbudom, Uzoma Ogbuji and Felix Orie, lamented that they lost everything they have in the inferno.
Michael, a father of two from Nkanu West LGA of Enugu State, narrated: “I was in my shop in the market when my wife called me and told me that our house is on fire.
“As I neared, I saw crowd gathered around the house, which had already been razed down.
“When I asked after my wife and children, I was told that they were rescued by neighbours and that my two months old baby was thrown down from the one-storey building into the waiting hands of neighbours.
“As I speak to you, we did not pick anything out of the house.
“All of them had turned to ashes.”
Orie, from Ebiaji, Umuezekoha in Ezza North Local Government Area of the State and father of six children, explained that they lost everything in their apartment, including academic certificates and other documents of theirs and their children.
Orie further lamented that the fire also consumed a huge, undisclosed sum of money entrusted in his hand by his Village Union, which was to be returned on Saturday.
Orie’s wife, Blessing, who could not hold her tears, specifically added that they lost, among other household property, their newly procured set of upholstery and refrigerator  valued at N400,000.
The victims called on Government and good spirited individuals to come to their aid as they do not have anything to fall back on at the moment, adding that they were able to save only the one cloth they were putting on.
Meanwhile, none of the residents and eyewitnesses was able to point to the cause of the fire.
Some of them simply alleged that the fire emanated from one of the apartments on the top floor.
They equally ruled out spark from public power supply, reasoning that there was no electricity supply in the area at the time the fire started.
However, another resident, who pleaded anonymity, said she suspected that the fire emanated from a spark from an electrical gadget which the owner forgot to switch off before leaving the house.
She narrated: “I was in the bathroom about to take a bath when I was called that fire was burning in one of the rooms upstairs.
“Before we could break the door, as the occupant was already out for business, the fire had gone wild with thick smoke covering the entire building.
“I was the one who called the occupant to inform him of the fire.
“This incident has rendered us homeless with enormous property losses valued over N60 million.”