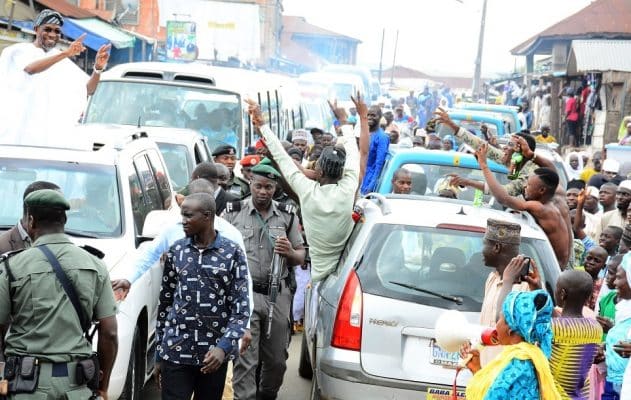 Share
Facebook Twitter LinkedIn Pinterest Email
The Governor of Osun State, Ogbeni Rauf Aregbesola, has charged Nigerians to shun any divisive tendency that could threaten the oneness of the country.
This was as the Chief Imam of Osogbo, Sheik Musa Animasaun, charged politicians to shun politics of acrimony and hate comments while seeking political offices.
The Governor also implored citizens to put the stability and progress of the country at heart before taking decisions on matters of national interest.
Aregbesola stated this on Sunday while addressing journalists shortly after the Eid-el-Fitr prayers at Osogbo Central Eid praying ground, Oke-Baale, Osogbo.
He called on political office holders to inculcate right the attitude that will guarantee unification, peace and stability of Nigeria.
From the Government House, Oke Fia, Osogbo, where Aregbesola took off to the praying ground, the governor’s convoy snaked through a thick crowd of residents who expressed support for him.
Many climbed rooftops to stand at vantage positions to catch glimpses of Aregbesola, waving at him.
Aregbesola held that it is high time for Nigerians to be more united than ever, regardless of their socio-economic, religious and ethic differences.
The Governor enjoined those at the helms of affairs to always prioritise people’s welfare and place their interests above individual and personal aspirations.
According to him: “It is time for us as Nigerians to be more united irrespective of religious, economic or ethic interests.
“We must shun any divisive tendency that could stimulate hatred and challenge to the stability of our nation.
“In our thoughts, deeds and speeches, let us promote peace, love, unity and stability of our nation because it through this that we can continue to exist as a united nation.
“Irrespective of our diverse nature, let us champion positions that would foster unity, growth and development of our dear country.
“We need to put the stability, progress and economic development of our nation as the major focus of our spiritual activities.
“We need a stable, united and a progressive nation for us to be happy with ourselves and be in harmony with ourselves and others.
“Our race needs a huge stimulus and this nation, Nigeria, needs to be at the forefront in achieving a great and viable economic status among its peers in Africa.”
Congratulating Nigerians, especially Muslims, on the successful completion of the one month-long Ramadan fast, Aregbesola tasked Muslim faithful across the globe to always stick to the tenets and injunctions of their faith.
He charged the Muslims Ummah to abstain from whatever the religion forbids and always to tow the path the religion prescribed.
He said: “As Muslims, we must tow the path which our religion prescribed.
“We have been patient.
“We have persevered and we have controlled ourselves during Ramadan period.
“We must sustain all this virtues after Ramadan.
“We must be good ambassadors of our faith and our nation.”
Earlier in his sermon, the Chief Imam of Osogbo, Sheik Musa Animasahun, stated that government and governance must be seen as responsibility and not a tool to milk the people and their resources.
Animasaun admonished political office holders to prioritise people’s welfare and place the interests of the masses above other considerations.
According to him: “Islam doesn’t forbid politics and we are not saying people should not be involved in politics, but whoever ventures into politics must do it with good intent of advancing humanity.
“We must shun politics of acrimony and hatred in all our conducts and always bear in mind that every action will be rewarded according to intention.
“Our politicians should shun backbiting and do away with politics of calumny that could trigger hatred, disaffection and as well breach peace in the society.”
Animashaun charged politicians and those seeking political offices to purse good aspiration by prioritising the interests of the masses, saying: “This virtues must be paramount in the minds of all politicians and leaders.”
While congratulating Muslims on the occasion of the Eid-el-Fitri, Sheik Animasahun admonished them to celebrate the period with the fear of God and moderation.
He charged Muslims to distant themselves from worldly things and be mindful of end time and day of judgement in all they do.
eid-el-fitr Ogbeni Rauf Aregbesola Osun State Ramadan Sallah Sheikh Musa Animashaun
Share. Facebook Twitter Pinterest LinkedIn Tumblr Email