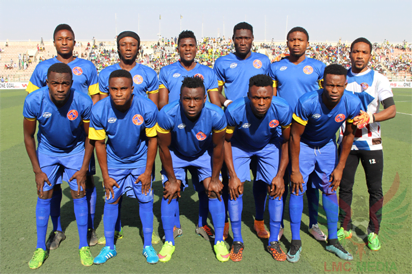 The News Agency of Nigeria reports that the 2020/2021 Nigeria National League match Day 9 was played at the Kwara Stadium Complex, Ilorin.

With this streak, ABS has returned to winning ways after three consecutive away losses.

It was Eguavon’s fifth goal of the season after rejoining the club from City rival, Kwara United FC of Ilorin, on loan.

The homers dominated proceedings for most of the first half and wasted so many goal scoring opportunities in the process.

Kale Karatu in the 10th minute benefitted from a loose ball and wasted no time in responding with a fantastic shot, which went wide.

The visitors would have been ahead in the 19th minute when Oche Josiah won possession in a dangerous position drove straight into the ABS box before his fine attempt went wide.

The host’s search for goals leave them short in the defence on most occasions as they struggle at times to cope with the pace and power of Tornadoes’ Oche Josiah.

ABS returned from where they left it in the second half when play resumed again as Mubaraq Gata fed an incoming Karatu in the 47th minute his shot was poorly played.

The hosts were awarded a penalty in the 52nd minute after Tornadoes defender was adjudged to have handled the ball in the goal area.

Gata made no mistake in the 53rd minute when he hit the ball directly into the roof of the net to score the ABS first goal.

ABS coach, Anthony Encho, made three changes in the 63rd minute to add notes to his attack when he introduced Taofik Aremu, Charles Eguavon and John Maurice as they came to replace Mubaraq Gata, Samuel Bamigboye and Karatu.

One minute later, Abdullahi Boje made a fine safe to deny the visitors from a corner kick.

Eguavon rose from the bench to score the winning goal in the 71st minute from a goal mouth scrambling after perfect team play by the hosts.

The ABS second goal lead only lasted for seven minutes when Tornadoes half the scores through John Jacob.

The visitors had some fringes of moments at the tail end of the match but ABS held on well to end the first round of the league with the 2-1 win.

The Ilorin-based side now moved to the fourth position of the log having started the match day in the seventh place on the table.