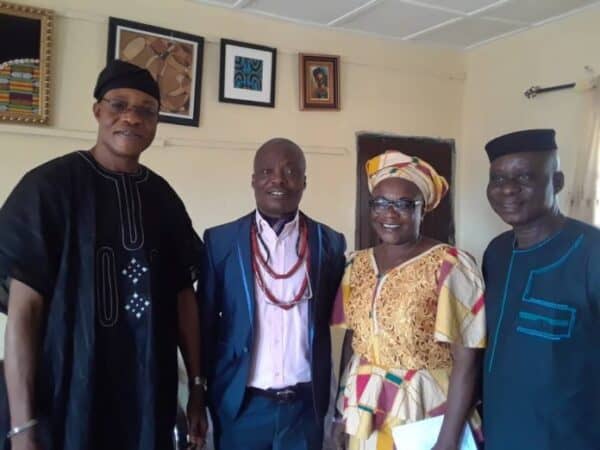 Leaders of Egbe Omo Usi, the apex socio-cultural organization in Usi-Ekiti, on Monday visited the Director General, Ekiti State Council for Arts and Culture, Ambassador Wale Ojo-Lanre, to officially congratulate him on his appointment by Governor Kayode Fayemi and seek government’s collaboration on USI-Day celebration 2019
The team, led by the National President, Engr. Debo Ayorinde; Vice President 1, Bunmi Awopetu; and VP 2, Ajayi Mathew, said Ojo-Lanre is a good ambassador of the historical community who they are proud of.
Ayorinde said Ojo-Lanre is one of the pride of Usi as he has distinguished himself in his chosen carrier as a journalist and his contributions to the community cannot be underestimated.
Corroborating Ayorinde, Awopetu said the entire people of Usi-Ekiti appreciated Ojo-Lanre’s effort and expressed optimism that he would not betray the confidence reposed in him as the face of USI community in the government.
Speaking on the 2019 Usi Day, Awopetu said another reason for coming was to resuscitate the existing relationship between the Council for Arts and Culture and USI in rebranding the festival and to attract more tourists and development to the community.
“The annual event, which started 38 years ago, was initiated to promote unity among the indigenes and showcase the cultural heritage of the town,” she added.
Banji Adelusi, Director of Culture, while speaking on behalf of the council’s management, said Ojo-Lanre’s activities since he resumed as the Director General has reflected that USI community is a place where “we have dominance of brilliant, educated and cosmopolitan people”.
Adelusi said further that part of the council’s job is to rebrand and promote cultural festival to project Ekiti culture and traditional heritage as well as enhancing the promotion of the economy of the state.
He however assured them that the government would give them necessary support in ensuring a successful celebration of USI Day 2019.
Ojo-Lanre appreciated the leadership of Egbe Omo Usi for the visitat and commendation.
He said: “I am passionate about the development of Usi and I will do everything to defend, promote the community that shaped my elementary.
“I have been involved in so many things about USI development and I will not relent in my efforts.”
Programmes lined up for the one-week event include Miss Usi beauty pageant, traditional and cultural event, carnival and grand finale to be held on August 3, 2019.