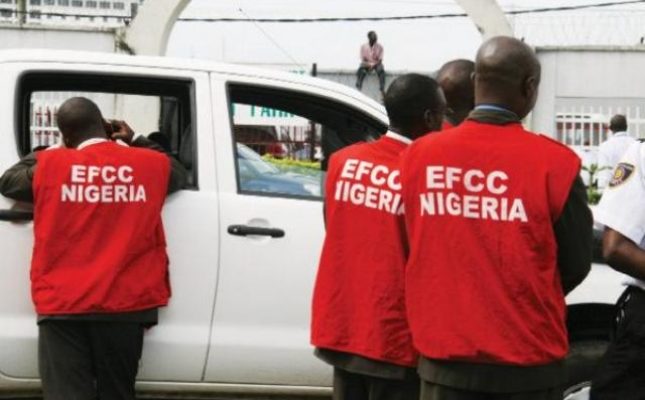 The EFCC on Thursday re-arraigned an American, Marco Ramirez, at an Ikeja Special Offences Court for allegedly defrauding three Nigerians of $1.2 million under the pretext of securing green cards for them.
The News Agency of Nigeria reports that Ramirez was re-arraigned before Justice Mojisola Dada on an amended 12-count charge of conspiracy and obtaining under false pretence.
Ramirez was arraigned alongside his companies – USA Now LLC; Eagle Ford Instalodge Group LP and USA Now Capital Group.
The EFCC said that Ramirez committed the offences between February, 2013 and August, 2013 in Lagos.
Ramirez is alleged to have defrauded Ambassador Godson Echejue, Abubakar Umar and Olukayode Sodimu of the money.
The offences contravene Section 1 (3) of the Advance Fee Fraud and Other Fraud Related Offences Act, No. 14 of 2006.
NAN recalls that the American and his companies were previously arraigned in June 22, 2017 before Justice Josephine Oyefeso, on 16-count charge of conspiracy and obtaining under false pretence.
He had plead not guilty to the offences and was admitted to bail in the sum of $25, 000.
However, midway to the trial, the case file was transferred to the Special Offences Court for speedy conclusion of the matter.
Following his re-arraignment before Justice Dada, N. S. Oweize, the EFCC prosecuting counsel requested for a trial date.
The defence counsel, Ademola Adefolaju, did not oppose the prosecutor’s request for a trial date but pleaded with court for Ramirez to continue to enjoy the bail conditions earlier granted to him by Justice Oyefeso.
Dada enquired whether the defendant had fully complied with his previous bail conditions, Adefolaju answered in the affirmative, noting that Ramirez had been visiting EFCC office as directed by the court.
Following Adefolaju’s submission, Dada said “having not shown any breach of the bail terms granted by my brother judge, the defendant is hereby allowed to continue with the previous terms”.
The judge adjourned the case until October 7, 8, 9 and 10 for trial.