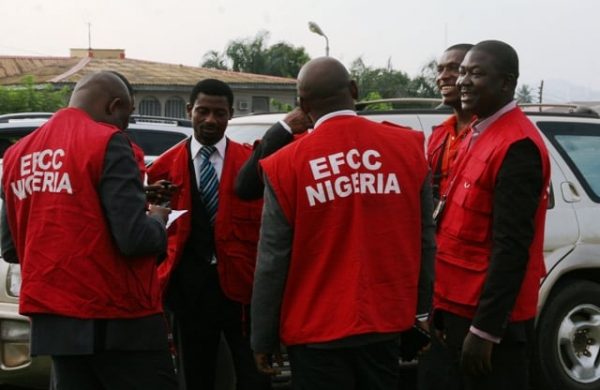 A suspected credit card fraudster, who allegedly masterminded the theft of 5,400 Canadian dollars from a catering entertainment outfit in Canada, has been arrested by the Economic and Financial Crimes Commission.
The Spokesman of the commission, Wilson Uwujaren, who disclosed this in a statement on Friday, identified the suspect as 20-year-old Yusuf Balogun Alabi, a Lagos resident.
Uwujaren said the bubble burst on Alabi after one Tony Adebero, a young Nigerian undergraduate of Thompson Rivers University in British Columbia, was arrested in Toronto, Canada, on charges of wire fraud.
Uwujaren said: “The youngster, who was expecting to receive his tuition from his dad, Oyewole Adebero, did not suspect fraud when his account was credited by his bank.
“He, however, became worried when few days after, he got a call from his bank, TD Canada Trust Bank, asking for details of the person who made transfer to his account, within 12 hours.”
The distraught student was said to have immediately called his father, who in turn contacted a Bureau de Change operator, Kassim Ishola, to whom he gave the money for transfer to his son.
The BDC operator reportedly mentioned one Idris Oni as the person he gave the money to transfer.
Idris, in turn, mentioned Alabi, the arrested suspect, as the man who effected the transfer.
According to the EFCC spokesman, Alabi supplied the name, Bacon Jamie Cecil, as the person that actually wired the funds to Tony in Canada.
Unfortunately for Tony, Bacon Jamie Cecil was discovered to be a fake name prompting his arrest in Canada.
Uwujaren said the scam was brought to the attention of the EFCC through a June 2 petition filed by Tony’s father, Adebero.
In the petition, Adebero informed the anti-graft agency that his son was charged to court in Canada for engaging in internet fraud.
Uwujaren said: “Adebero explained that sometime in 2016, he approached his bank in Nigeria when he wanted to pay his son’s school fees in Thompson Rivers University BC Canada but had difficulty due to foreign exchange scarcity and the stiff forex regulations at the time.
“In the midst of the challenge, he met a church member, one Ibidola, who also had children schooling abroad.
“She introduced him to the Bureau de Change operator that would help transfer the funds to his son.”
According to him, Adebero said his son later informed him via telephone on September 6, 2016, that his Canadian bank called him requesting for the details of the person who made the transfer to his account.
Tony reportedly told his father that the information was to be provided to the bank within 12 hours, as they suspected a fraudulent transaction.
Investigation by the commission, according to Uwujaren, led to the arrest of the prime suspect, Alabi.
Uwujaren said: “The EFCC found that Alabi, in an online transaction, contracted a caterer in Canada, Bruce Morris, while posing to be a lady by name, Monica Donal, based in the United States of America.
“He, thereafter, initiated the fraud by placing request for 100 boxes of lunch for a family reunion to Bruce Morris, owner of Kaizen Catering Entertainment, Brantford Canada.
“They arrived at an estimated figure, while Bruce raised an invoice for payment.”
During interrogation, the suspect reportedly told investigators he had several credit cards in his possession, which he kept trying, until one pulled through and about 11,000 Canadian dollars was transferred to the catering company.
Alabi said he instructed Bruce to transfer the sum of 5,400 Canadian dollars to Tony’s account in Canada, according to Uwujaren.
Tony’s father told the commission that he paid N1.4 million, equivalent to 7,400 Canadian dollars, to the BDC operator being the money transfered to his son in two installments of $2,000 and $5,400.
The commission spokesman said Alabi had made confessional statements to the commission.
Uwujaren said the suspect admitted that he perpetrated the fraud with the use of credit card numbers which he claimed to have accessed from an online site.
He stated that Alabi is presently in the EFCC custody and investigations will still continue