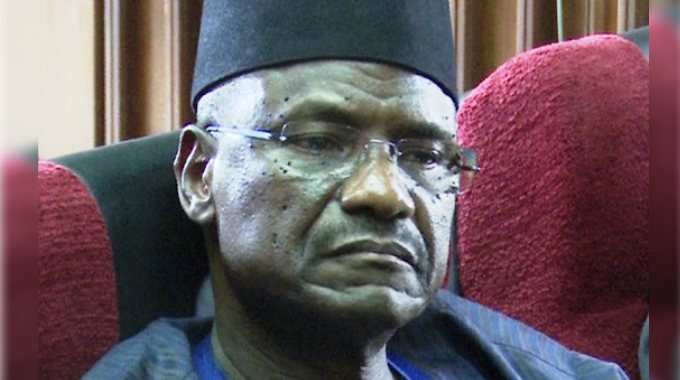 The Federal High Court, Abuja on Tuesday heard that a former Chief of Air Staff, Mohammed Umar, has commenced an out of court settlement in the money laundering charge against him.
Umar is being tried on a seven-count charge bordering on money laundering of N4.8 billion, while he was Chief of Air Staff.
He had pleaded not guilty and was granted bail by Justice Binta Nyako on self-recognition.
At the resumed hearing on Tuesday, Umar’s Counsel, Hassan Liman (SAN), informed the court of moves by his client to have the matter settled out of court.
Liman said his client has held meetings with officials of the Economic and Financial Crimes Commission.
He said the first meeting, involving the head of legal department of the commission, the prosecuting counsel and Umar was held on May 31, while another meeting was held on June 3.
He said in attendance at both meetings was a member of the EFCC task force, Ibrahim Musa, and the prosecution counsel, Sylvanus Tahir.
He said it was resolved that the defendant should send a formal communication to the commission.
Liman further disclosed that a formal letter addressed to the Chairman of the EFCC, Ibrahim Magu, dated June 6, had already been dispatched.
Confirming the development, the prosecuting counsel said he was aware that the defendant had written a letter to the chairman of the commission.
He said in the letter, the defendant was seeking to engage the Federal Government in a discussion over the charge.
“I also confirm that there were meetings between the defendant and the commission, where I was also in attendance,” Tahir confirmed.
Meanwhile, when the matter was called, the prosecuting counsel said they were ready for the trial, but Liman said it would be prejudicial to commence trial.
Liman said this was in view of the ongoing attempt to settle out of court.
He urged the court to grant an adjournment to enable them proceed with the out of court settlement in spite of the fact that the matter had been set down for trial.
The prosecuting counsel, however, insisted that the out of court settlement was not a ground to stop trial since it was not a civil matter.
Tahir urged the court to order for commencement of trial.
Justice Nyako, however, held that trial could not commence since the condition precedent for trial had not been met by the defence.
Nyako said the defence ought to have filed a summary of defence for the trial to commence.
She adjourned the matter till June 16 for commencement of trial.