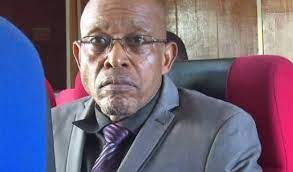 The new application is filed by the prosecuting counsel of the EFCC, Barr. J. Sandi, challenging the jurisdiction of the Court to entertain the matter.

Etukudo is standing trial over a 15-count charge bordering on conspiracy and diversion of funds to the tune of N359million.

The Economic and Financial Crimes Commission, EFCCis alleging that Dr. Etukudo has committed the crimes alongside Yusuf Samuel, Accountant, FSMLT; Echewa, and Esio Udoh, both contractors of the health institution.

The EFCC had after Etukudo’s arraignment, presented witnesses, including PW1, Ethel Ekan, to commence trial, and to be cross-examined. However, when the matter came up Thursday for the continuation of hearing, the prosecuting counsel, Barr J. Sandi told the court that he has filed a motion dated 12th July, 2021 and filed on the 15th of July, 2021.

The Prosecutor said the grounds of the motion as contained in the face of the motion consist of a 14 paragraphs affidavit, two annexures and a written argument, and adoted the processes as his oral submission in the matter.

He also reported that he has received a counter affidavit from the first defendant’s counsel and as a response filed a further and better affidavit.

According to him, the application hinges on the premise that, by virtue of section 251 of the 1999 Constitution as amended in 2010, only a National Industrial court has jurisdiction to entertain an employer/employee dispute.

The situation that went adversary, when the counsel to the first defendant, Solomen Umoh raised objection to the submission, urging the court  not to entertain the issue of jurisdiction, saying it is a ploy to delay prosecution.

According to him, “the jurisdiction of the court at this moment is strange and estranious, wondering why the EFCC decided to come out with such a motion in the middle of the trial.

This should have come form the Federal Ministry of Health if they felt in anyway affected”.

He said he has foreseeing that EFCC lacks diligence prosecution in this matter, why would EFCC bring the issue of jurisdiction at this point, after it has brought the matter to this honourable court, and after calling three witnesses, and will come back to start challenging the jurisdiction of the court.

He however urged to court not to accept the application, as entertaining it will be against the judicial process.

On his part, counsel to the second defendant, Barr. Martin said he didn’t file any response because the action of the prosecuting counsel is evident that they just out to waste the previous time of the court.

Having listened to both arguments, the preciding Judge, Justice Agishi reserved to April, 28th 2022 for the ruling on the application and continuation of hearing.