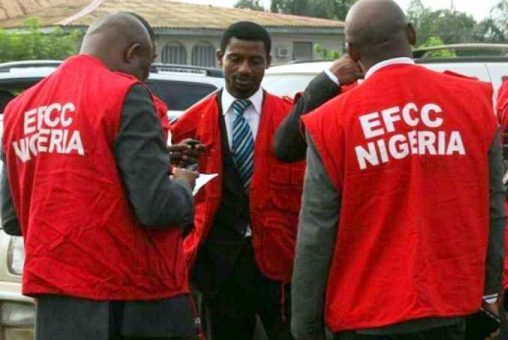 The Economic and Financial Crimes Commission on Friday filed an amended three-count charge against Faisal Maina, son of Abdulrasheed, former Chairman, Pension Reform Task Team.
The charges, which were read to Faisal before Justice Okon Abang of the Federal High Court, Abuja, bordered on money laundering and false declaration of assets.
The defendant, however, pleaded not guilty to the amended three-count charge.
The News Agency of Nigeria reports that Faisal, alongside his father, was arraigned on October 25, 2019 by the EFCC on a three-count charge bordering on money laundering.
At the resumed hearing on Friday, Mohammed Abubakar, counsel to the EFCC, told the court that though the matter was slated for continuation of cross examination of second prosecution witness, the commission had an amended charge dated January 22 and filed the same day.
Adeola Adedipe, counsel to Faisal, however, objected to the application.
Adedipe noted that though the prosecution deserved the right to amend the charge, such amendment must be prescribed by the leave of court as provided by Section 218(2 ) of the ACJA.
“The order of court is not appropriately endorsed on the purported amended charge. So it may not be useful for today’s hearing,” he argued.
Abubakar, however, countered Adedipe’s argument.
According to him: “I submit that counsel misconceived the intent and purpose of Section 218(2) of ACJA because it does not make it mandatory for prosecution to first obtain leave of court before filing an amended charge.
“The counsel has jumped the gun because the issue of endorsement can only come after the amendment.”
Justice Abang, who noted that the drafter of Section 218(2) of ACJA might have created the controversy, granted the anti-graft agency’s prayer.
He held: “Section 281(2) is not clear on whether it is the judge or registrar that will endorse the note of order of amendment.
“However, there is no dispute to right of prosecution to file an amended charge at anytime.
“In the light of this, the leave is hereby granted to the prosecution to file an amended charge.
“And the amended charged filed on January 22 is deemed to be properly filed.”
Abang said since the problem on who signs the amended charge was caused by drafter of ACJA, he ordered the prosecution to endorse it in the open court.
According to the judge, the defendant will not be prejudiced if the court asks the prosecution to endorse the note of order of amendment in the open court.
The EFCC lawyer then sought that the amended charge be read to defendant.
After Faisal pleaded not guilty to the charges, his lawyer pleaded with the court to allow him continue to enjoy the bail terms graciously granted to him by the court on November 26, 2019.
Adedipe argued that the defendant had complied with the bail conditions initially granted him.
“The defendant came from his house today and was equally accompanied by the surety in compliance with court order,” he said.
Abubakar did not raise objection to the request.
Justice Abang, therefore, granted Adedipe’s prayer.
He ruled: “The defendant shall remain on the subsisting bail order granted on November 26, 2019 by this honourable court.”
Abang adjourned the continuation of trial and cross examination of PW2 until February 27, March 18, March 19, March 20 and March 30.
NAN reports that Faisal was on November 26 admitted to a bail in the sum of N60 million, with a surety in the like sum, who must be a member of House of Representatives.
The three-count charge reads: “That you, Faisal Abdulrasheed Maina (alias Alhaji Faisal Abdullahi Farms 2) between Oct. 2013 and June 2019 within the jurisdiction of this Hon. Court did operate an anonymous account No: 1017558607 (Alh Faisal Abdullahi Farms 2) in a commercial bank by concealing your true identity and you thereby committed an offence contrary to Section 11(1) of the Money Laundering (Prohibition) Act, 2011 (as amended) and punishable under section 11(4) of the same Act.
“That you Faisal Abdulrasheed Maina (alias Alh Faisal Abdullahi Farms 2) between Oct. 2013 and June 2019 within the jurisdiction of this Hon. Court, indirectly controlled an aggregate sum of N58,111,585.00 (Fifty Eight. Million, One Hundred and Eleven Thousand, five Hundred and Eighty Five Naira only) paid through a commercial bank account of Alh. Faisal Abdullahi Farms II, when you reasonably ought to have known fhat the said funds formed part of the proceed of unlawfui activity (to wit: corruption of one Abdulrasheed Abdullahi Maina who is facing a separate charge) and you thereby committed an offence contrary to Section 15(2)(d) of the Money Laundering (Prohibition) Act, 2011 (as amended) and punishable under section 15(3) and (4) of the same Act.
“That you Faisal Addulrasheed Maina on or about Oct 3, 2019, at Abuja, within the jurisdiction of this Hon Court knowingly failed to make full disclosure of your assets and liabilities in the Declaration of Assets Form dated Oct. 3, 2019 which you filled at the Economic and Financial Crimes Commission (EFCC) office at No. 5, Fomella Street, Wise II , Abuja, and you thereby committed an offence contrary to Section 27(3)(a) of the EFCC (Establishment) Act., 2004 and punishable under Section 27(3)(c) of the same Act.”