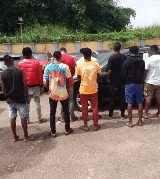 The operation was carried out on Tuesday.

The suspects have made useful statements and will be charged to court as soon as investigations are completed, the anti-graft agency said.