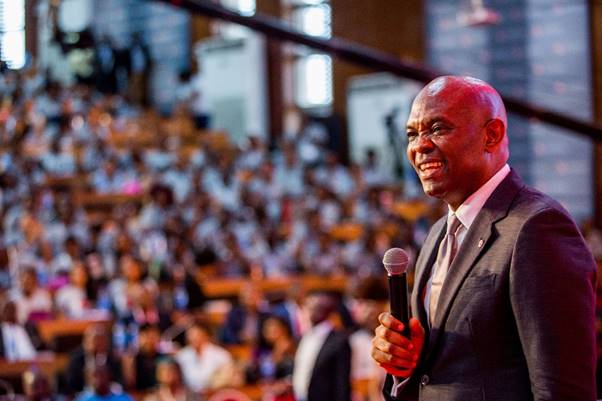 Frontline businessman and founder of the Elumelu Foundation, Tony Elumelu, on Wednesday said the surest way of tackling poverty was economic empowerment of the people.

Elumelu spoke in Lagos at the 2017 Philanthropist of the Year Award organised by PerSecondNews.Com, an online medium.
The News Agency of Nigeria reports that Elumelu was presented with the award which had its theme “Philanthropy as an Emerging Contributor to Development’’.
The businessman said Africa would rise above many of its development challenges if given the requisite support for entrepreneurship.
He said the Tony Elumelu Foundation recognised entrepreneurship as the catalyst for economic growth, hence its focus on mentorship and funding for start-ups.
Elumelu also said the ultimate objective of the foundation was to produce an “army of young African entrepreneurs” who provide economic opportunities in their respective countries.
He said: “The Tony Elumelu foundation believes that the best way to eradicate poverty is through economic empowerment of citizens.
“That is why we are investing in entrepreneurship ideas across Africa through funding and mentorship support for start-ups, especially those conceived by young people.
“We believe these young people can help achieve the dreams of the continent through opportunities creation if the right support is given to their business ideas.”
According to him, the foundation has mentored 1,000 young entrepreneurs annually across the continent with seed grants to start up.
Elumelu added that the main target was to create 10,000 entrepreneurs in agriculture, manufacturing and others in the next 10 years, who were expected to create one million jobs across Africa.
He said the foundation would give assistance annually to the distressed regions of North-East and Niger Delta.
He said philanthropy was a way of life for him, adding that he was overwhelmed by the award.
Elumelu said: “I am positively overwhelmed by this award and I dedicate it to the beneficiaries of the foundation who are changing lives across Africa.”
The Chairman of the Niger Delta Development Commission, Senator Victor Ndoma-Egba, who presented the award, described Elumelu as Nigeria’s gift to Africa.
He said the businessman had done a lot to impact on the lives of many people across Africa.
Earlier, the Publisher of persecondnews.com, Femi Soneye, said the organisation considered Elumelu for the award because of his humanitarian activities.
Soneye said: “What we celebrate most in this country is entertainers, movie stars, and politicians; we hardly recognise people based on their philanthropic activities.
“So, we sat down and said who do we recognise for the great impact they are making on lives and Tony Elumelu’s name emerged.
“Through his foundation, he has empowered many people and we think we need to celebrate him to encourage other people.”
He urged well-meaning Nigerians to emulate Elumelu by giving support to others.
NAN reports that a group, Dream From The Slum, a private free school initiative based in Ajegunle in Ajeromi-Ifelodun Council Area of Lagos State, was also honoured at the occasion. It runs free education for children of the poor in the slum area of Ajegunle with volunteer-teachers.
Former spokesman to ex-President, Goodluck Jonathan, Dr Reuben Abati, Emeka Mba, former DG of National Broadcasting Commission and popular actress and singer, Jennifer Eliogu, were dignitaries who graced the occasion.