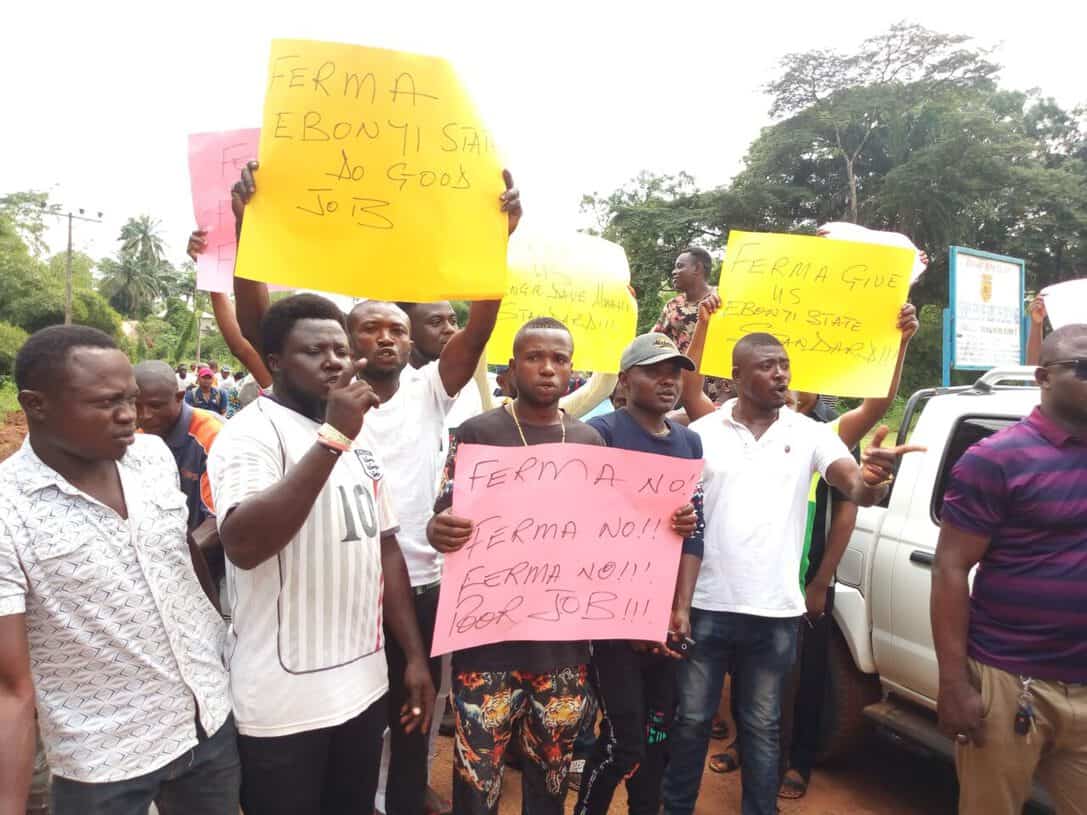 A combined delegation of youths from Onicha and Ohaozara Local Government Areas of Ebonyi State numbering over 50 on Wednesday protested against what they described as poor job quality being executed by the Federal Road Maintenance Agency in the area.
FERMA is currently undertaking intervention works on the Okposi-Onicha section of the  Okposi-Onicha-Isu to Nara in Enugu State, a federal road.
The youths in company of some State Government officials displayed placards with various inscriptions such as: FERMA, we say no to poor jobs; FERMA, give us Ebonyi standard; Ebonyi State do good jobs.
The youths, who also made moves to attack the FERMA officials and workers  on site, were, however, pacified by the Government officials on ground who took turns to address the situation.
The Government officials, including the Senior Special Assistant to Governor David Umahi on Project Monitoring, Itapa Azuobu; the Onicha Local Government Area Council Chairman, Felix Igboke; and the Special Assistant to the Governor on Youth Mobilization, Mark Onu, while speaking to journalists explained that the job being executed by FERMA in the State fell short of the standard and quality which the Governor had already instituted.
They accused the FERMA Director in the State of using inferior materials and lowered specifications in executing the bridges and drainages, alleging that the official displayed rude behaviour when confronted over the matter.
They demanded that the job be stopped forthwith until all grey areas are settled in such a manner that the job would stand the taste of time when accomplished.
Azuobu summed: “In this State, we don’t do drainage with BRC wire mesh.
“In this State, our standard for a road drain is 7.3 metres and the shoulder should be 1.5 metres with 3 metres apart, which at the end of the day, you will get 10.3 metres as the specification.
“The strength of the drainage would be 0.5.
“With the wire mesh, we are not doing anything because any erosion can wash that thing off the road.
“So it is a sub standard job, and I have demanded for the specification and the design because every job must have a design.
“It appears they are doing the job off their heads.
“The Governor has turned Ebonyi State into a construction site and we know you cannot go into a construction site without a mixer.
“Look at the chipping they have there, obviously of very low standard.
“When I was here yesterday, I appreciated FERMA for beginning to fix the road, but we will not accept shoddy job.”
The FERMA Director in the State, Eberechukwu Ogbuagu, debunked all allegations raised against her by both the youths and the State Government officials.
Ogbuagu noted that FERMA only plays intervention role on federal roads to make it passable by undertaking some remedial actions, stressing that the full road construction is the responsibility of the Federal Ministry of Works.
She observed that the road in question has been neglected for a very long time until it was captured under FERMA project in 2017 for palliative actions and insisted that she could not have gone beyond the modus operandi and specifications of FERMA in handling the project.
She further explained that the initial project involved only the bridges and culverts along the road, but noted that she had to push further for the Federal Government to approve the construction of the road to connect the bridges for the benefit of the people.
She stressed: “For us to construct the culverts, I pushed for a road contract to connect the culverts, which was approved by the Agency.
“There is a provision for a stone base of 160cm and asphalt of 40cm, among others which are contained in the specifications  for the road projects.”
Ogbuagu emphasized that copies the contract and job specification papers were submitted to the State Government through the State Ministry of Works and
Transport as required before commencement of the project and wondered why she should be the object of attack by the youths.
Ogbuagu, who also alleged that she and some of her workers were viciously attacked by the youths, further advised the State Government officials to channel their misgivings to the national office of FERMA rather than obstructing the job.
Meanwhile, the Government officials and the youths on their part denied any attack on the official and her workers.