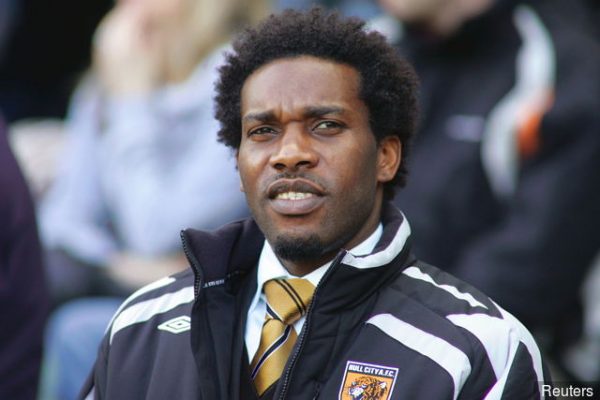 Football fans in Ebonyi have joined others across the country to celebrate former Super Eagles midfield maestro, Augustine Okocha who turned 46 on Wednesday.
The News Agency of Nigeria reports that the AFCON (1994) and Olympic Games (1996) gold medalist, was capped at both junior and senior levels for Nigeria from 1993 to 2006.
The fans in separate interviews with NAN in Abakaliki wished Okocha popularly known as `Jay Jay’ well in his endeavours.
The fans said that Okocha, a skilful player, who was touted by the great Pele as one of the greatest footballers of all times, a national asset.
Nobert Okolie, Media Officer of Enugu Rangers International, where Okocha commenced his march to stardom, said that the Rangers family would always be proud of ‘Jay Jay’.
He said: “Okocha followed the footstep of his elder brother and former international, Emmanuel at Rangers before sojourning to play for foreign club sides such as Eintracht Frankfurt (Germany) Fenerbahce (Turkey) Paris St. Germain (France) and Bolton Wanderers, Hull City (England).
“He has served as a source of motivation for players who play for Rangers club sides across the globe; we wish him God’s protection and continued success in life.”
Hilary Obiesie, former Secretary of Ebonyi Sports Council wished Okocha well, noting that he left a ‘big shoe’ in the Super Eagles creative midfield role.
He said; “Several football commentators have used different adjectives to describe Okocha’s midfield ingenuity and none has been found aptly adequate.
“It is no wonder that since his retirement, the creative midfield role has been problematic in spite of the deployment of stars in that position.
“Some of the stars are Wilson Oruma, Kanu Nwankwo, Mikel Obi, Alex Iwobi.”
Francis Nlemigbo, a Football Betting Operator, said that the feats recorded by Okocha during his playing career would be difficult to attain by Nigeria footballers both active and retired.
He said: “Okocha’s wonder goal against Karlsruher of Germany after mesmerising Oliver Khan and other defenders is still considered one of the best goals in world football apart from winning an AFCON and Olympic Games gold medals.
“He scored 1000th goal in AFCON history at ‘Tunisia 2004’, won the British Broadcasting Service African Footballer of the Year in 2003 and 2004, AFCON 2004 tournament best player among other club and national honours.”
Rose Chukwunenye, a Financial Expert and Soccer buff, noted that Okocha showcased his uniqueness by equitably managing his finances to stay ‘afloat’ after retirement.