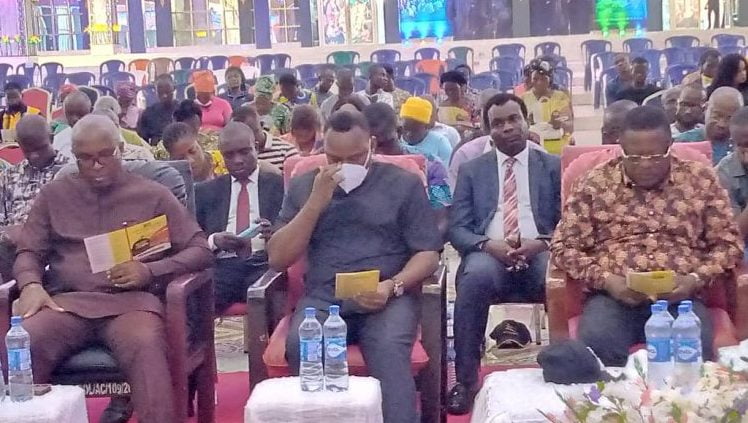 The Ebonyi State Government in conjunction with the State Chapter of the Christian Association of Nigeria has flagged-off a three-day prayer with fasting, seeking God’s intervention in the affairs of the State.

The prayer with fasting was declared on Tuesday by Governor David Umahi following the death of his Commissioner for Infrastructure for Concession, Engr. Fidelis Nweze, on Tuesday, and the earlier demise of another Commissioner, Uchechi Okah, about a month ago, during an illness

The prayer event, with the theme: “God Protect Our State and Leaders,” was flagged off at the Christian Ecumenical Centre, Abakaliki on Wednesday with Governor Umahi,  members of his State Executive Council, other appointees, public and civil servants in attendance.

Umahi paid glowing tribute to the departed Council members, describing them as having played strategic roles towards the realisation of the Ebonyi Ring Road project.

He assured that his government would continue to extend all right and privileges due to all Council members to the deceased members throughout his tenure as Governor in the State.

Umahi added: “We have directed autopsy to be carried out on him for the records.

“We have also directed his driver and Orderly to go to the Commissioner of Police and make formal statements.

“I was so angry when the CP called me that some people blocked Onueke Road, demonstrating that Nweze was killed by somebody.

“I asked him whether he has made some arrests and he said yes.

“Those people that were arrested will not see the light of day for a very long time.

“Their action is an insult and unpardonable.

“Nweze is a humble born again Christian who does not indulge in any fetishism, and I have never been called to settle any quarrel between him and anybody.

“If you don’t know juju, juju will not know you, and there is no power that can kill a child of God.

“Nweze and Uche, they are irreplaceable, and I am saying it with every sense of reality.

“It is difficult to describe any of them.

“Nweze’s life is a lesson to all of us: as long as we live, to strive to live well; a great loyalty in a time of wickedness; a time that betrayal is the reward for good done unto people.

“And as God directed, all personal projects they have, whether in the village, in the town or both, we will take them over as government.

“We will make sure that before we bow out of office, we will have money in the Bank that each and everyone of their kids will attain University education with.

“And I will continue to treat each of them as if they are still members of the Exco.

“Whatever Exco members get, they will continue to get until I leave office.

“It is too difficult to lose Nweze

“The gap created by Uche was difficult to fill; very difficult.

“Even the International Bank, African Development Bank, it was a big shock to them, but our prayer to the good Lord is that we will not be left empty.”

In a brief exhortation, the South East CAN chairman, also CAN Chairman, Ebonyi State, Rev. Fr. Abraham Nwali, described death as a truncator of human dreams.

Drawing inference from the Bible readings: 1 Thesalonians 4:13-18 and Gospel according to St. John 14:1-16, Nwali referenced the good works and testimonies about Nweze, challenging Christians to always live in such a manner as to leave good legacies behind, adding that the world is not a permanent place of abode.

Prayers were offered for the repose of the souls of the deceased, their families, State and government officials as well as for peace and security in the South East.

The prayer event was followed by a condolence visit to Nweze’s widow, Chinwe, and members of his family in their Abakaliki residence, led by the Governor and the CAN chairman.